The Jetty is an icon for Coffs Harbour because it was part of the beginning of the city’s economic growth. Before the jetty was built, logs were hauled to a site at the showground by bullock teams.  From there they were rolled into Coffs Creek and floated to its mouth on the outgoing tide by using bullock teams, ropes and pulleys. The logs were manoeuvred through the water to waiting ships beyond the line of surf.  Using ships’ winches, the logs were hoisted aboard. The process of loading was difficult and hazardous and, as the industry grew, it was necessary to construct a suitable jetty.
The builder
A builder and contractor, Mr Thomas L Lawson, was the successful tenderer.  Construction of the new jetty began in 1890.  The original length was 1641 feet (500.17m).    During construction a violent storm washed away 300 ft (91.5m) of the partially built structure.  The total expenditure of the completed jetty in August 1892 was £12,482 1s 8d ($24,964.10). The Public Works Department (PWD) accepted control of the jetty and was responsible for all future maintenance and improvements. The jetty was described in a newspaper article as ‘an outlet for our produce and an inlet for our necessities’.
Opening of the Jetty
Adjacent to the shore end of the jetty were calf and sheep pens, a goods shed and a wharfinger’s cottage. On completion of the goods shed the opening ceremony was arranged by Messrs Lee, Marles and Gill for Friday 5 August 1892.  A beautiful arch was erected over the western end of the jetty and the goods shed was adorned with ferns, greenery and flags and delicious food was presented there.  A banner suspended from the arch bore the words “Success to Coffs Harbor” while from a cord profusely decorated with flowers and ribbons hung the bottle of “fizz” with which the oldest resident of Coffs Harbour, Mr Peter Moller, was to perform the opening ceremony.
The arrival of Mr O. O. Dangar, Member of the Legislative Assembly, at 11.30am was received with cheers.  A large crowd gathered to witness the ceremony which, after a few words from Mr Moller, was duly performed amid cheers. Mr James Gill, Wharfinger, then read an address to Mr Dangar on behalf of the residents. Mr Dangar responded to the speech congratulating the people on the completion of the work. After the speeches, the Coramba Brass Band played suitable music and then a special luncheon was held.  At dusk, some people departed but others enjoyed a ball in the goods shed.

Development of the jetty
In 1909 a new 80ft x 30 ft (24.38m x 9.14m) cargo shed was provided, as well as a large waiting shed at the outer end of the jetty and additional trollies.  In 1909-10 the outer end of the jetty was widened and a duplicate tram line laid.
In 1911 the Public Works Department imported a new 1910 steam locomotive (Orenstein & Koppel No. 4365) and the jetty was strengthened to accommodate it.  This replaced the draught horses previously used to pull the trollies.
In 1912 gas lighting was added to the jetty.  In 1914 widening of the jetty to 41 feet (12.49m) and construction of 320 feet (97.53m) extension was completed.
During 1915 the rails were converted to 4 ft 8 ½ in to be compatible with the new railway line being laid from Raleigh to Coffs Harbour.

In April 1946 further extensions were completed.  The jetty was widened at its base to accommodate a loop line to the new Northern Timber Depot and the track layout on the jetty was altered considerably.
Jetty Cranes
A single railway line of 3ft 6in gauge was laid along the centre.  A five-ton (4.53 tonnes) capacity steam derrick crane, built by Rogers of Newcastle, was erected near the end of the jetty for loading vessels.  The first crane driver was Dan Shea.  Pop Sampson and Cecil Owen Walsh were engine drivers. A number of small wooden trollies were provided for the conveyance of cargo along the jetty.
In 1906-07 the crane was replaced by a 7 1/2-ton (6.80 tonne) capacity steam derrick one from the Clarence Harbour Works, built by Ransomes and Rapier.  By 1909, increased traffic at the port facilities necessitated the jetty to be upgraded. In 1914 a second steam crane (10-ton capacity) was erected at the outer end of the jetty.

Two new steam cranes were purchased for use on the jetty in 1928-29.  The first was a five and a half ton (4.98 tonne) capacity crane at the base of the jetty and the second, a seven and a half ton (6.80 tonne) capacity travelling crane.
In 1947 a timber floodlighting tower was erected to facilitate night work. Two diesel electric travelling cranes, Nos 209 and 210, provided prominent landmarks in the port area.  The cranes were constructed by Messrs. Stothert and Pitt of Bath, England in 1944 for use in the Normandy invasion of France.   No. 210, which was bought from Evans, Deakin and Co Ltd of Brisbane, was erected on the jetty in December 1947 with special rails being laid for it.

In 1949 electric travelling gear was installed on the crane.  By July of that year the North Berth steam crane had been removed, leaving No. 210 as the sole operational crane.  This was later joined by No. 209, the inner crane, identical to the other one, which was supplied by the State Dockyard.  This crane became operational in August 1955.  The main function of the cranes was to load timber onto ships but, they were also used for jetty maintenance, especially pile driving.  With the cessation of regular shipping from Coffs Harbour in the mid-1970s they fell into disuse.  After 1973 owners of fishing vessels relied on the cranes to lift their boats on and off the jetty for maintenance and servicing.
Shipping
The first cargo loaded at the jetty was a consignment of sugar from Alexander Herman’s mill at Korora.  Although the jetty was not completely finished, Mr Lawson allowed Mr Herman to use the builders’ trucks to carry the sugar to a chute at the end of the structure, where it was loaded into the tiny ship Byron commanded by Captain Hunter.
Over a ten-year period from 1906, more than 400 ships a year called at the jetty.    During the following years, better rail transport and improved road conditions plus the build-up of sand in the harbour resulted in fewer ships calling at the jetty.

The most popular passenger vessel to leave Coffs Harbour for Sydney was the SS Fitzroy, commanded by Captain James Colvin.  It left the jetty at 3pm every Sunday arriving in Sydney the next day.  Passengers were embarked in a large basket which was lifted from ship to jetty and back again by one of the jetty cranes.

Inside the basket were two rows of seats facing each other which held a total of eight people.
By the 1970s the jetty had begun to slip into a state of disrepair.  The last regular trading vessel to call at Coffs Harbour, the Abel Tasman, paid its final visit in 1973.  The Lorrana loaded the final commercial shipment on 22 July 1979, when it sailed for Lord Howe Island with a cargo of provisions.
End of Commercial Activity
In 1982 most of the railway track was removed to enable replacement of defective timber decking.  Several sheds were demolished and two piles replaced. Due to their unsafe condition, the cranes were demolished by April 1984.  Their removal ended nearly a hundred years of commercial activity on the jetty.
The Centenary
Residents dressed in period costume for the jetty centenary celebrations held on 2 August 1992.  Bush ballad recitals, tug-o-wars, whip cracking, hay cart rides, buskers, model steam engines, vintage cars and historical photographic displays delighted the many people who came to witness the centenary of our icon.  There was a working model of the Timmsvale sawmill brought to life by Dudley Timms from the original stationary mill built by his father 50 years previously. A short official ceremony on the jetty was held at 11am Sunday when a giant birthday cake was cut by special guest, Marjorie Nelson (nee Jackson).  The week of festivities culminated in a Gala Ball held in the Town Hall on 8 August 1992. 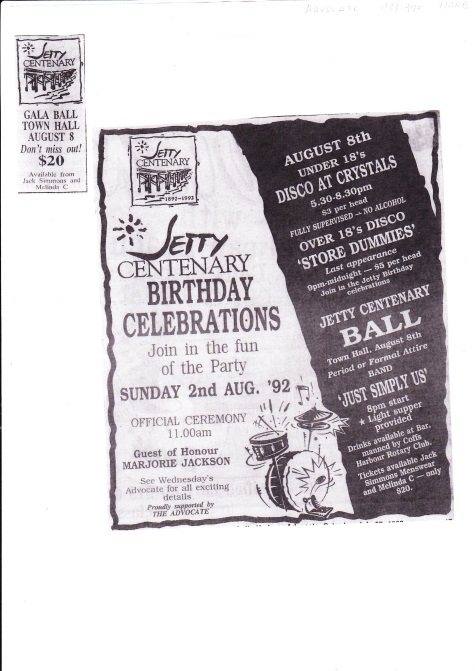 And Beyond
The jetty became unsafe and was closed in 1990.  A spirited campaign  by local historian Naomi England sought to save it. It was listed under the Heritage Act and as it was the only remaining jetty on the North Coast, the New South Wales Government decided to conserve it.  A Save the Jetty Fund was launched in 1992 with its goal being $100,000 towards the total cost. Work began in March 1996. Timber used was blackbutt, tallowwood and spotted gum.  The original piles were made of turpentine. The decking was removed and replaced.  A firefighting system was installed with safety fencing, lighting and seating benches.  The final cost was $3.8 million. 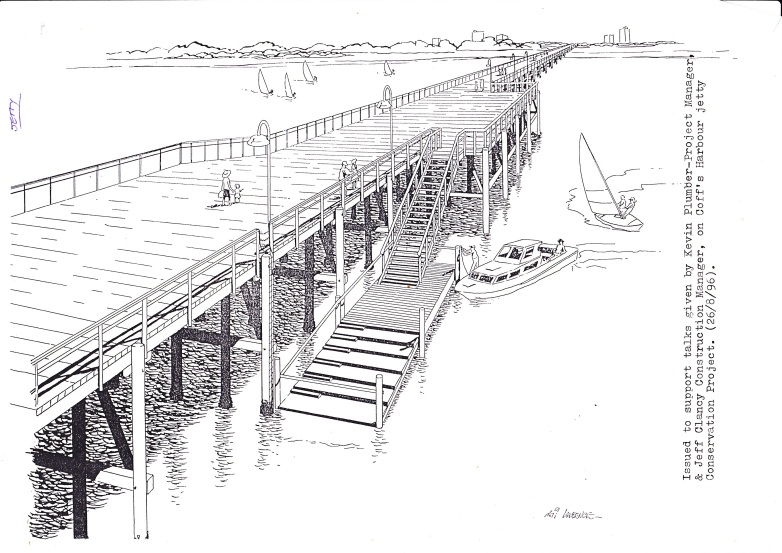 As the jetty was closed to commercial shipping for 20 years and to the general public since 1990, there were big festivities to celebrate the re-opening on 11 October 1997.  Mayor Cr John Smith, and Andrew Fraser, Member for Coffs Harbour, officiated at the opening and the ribbon was cut by Carl Scully, Minister for Roads, NSW.  A re-enactment of a scene depicting Captain Korff stepping off the steamboat Mary was the highlight.  Sporting events, displays, food, drama and musical concerts were also enjoyed. There was a Best Decorated Boat competition and night entertainment including sky diving by Coffs City Skydivers and fireworks.
Our jetty is now enjoyed by tourists and residents alike for recreational purposes – walking, swimming and fishing and will continue to be an icon for our city.
Sources
Ships and Timber – a short history of Coffs Harbour port and associated railways, Dr John Kramer, 1984, 994.43 KRA
Coffs Harbour 100 years down the track, Jean Donn-Patterson, 994.43 DON
OPENING OF COFFS HARBOR JETTY. (1892, August 10). Macleay Argus (Kempsey, NSW : 1885 – 1907; 1909 – 1910; 1912 – 1913; 1915 – 1916; 1918 – 1954), p. 4. http://nla.gov.au/nla.news-article234191457
Reminiscences of Jetty Town, 2015, 994.43 REM or available for sale at the Coffs Harbour Regional Museum.
The Advocate –
17 August 1956 First cargo
10 December 1981 Cranes on jetty
2 May 1992 Save the jetty fund
22 July 1992 Working model of Timmsvale Sawmill
31 July 1992 The Centenary
1 August 1992 Gala Ball for centenary
4 August 1992 Outlet for produce inlet for necessity
14 May 2001 PWD have control of jetty.  Replacement of crane
Jetty Times, 9 March 1996 Jetty restoration
The Coffs Harbour Advocate, 14 October 1997 Re-opening ceremony
Acknowledgement
Compiled by Museum volunteer, Marie Davey

10 thoughts on “The story of the Coffs Harbour Jetty”