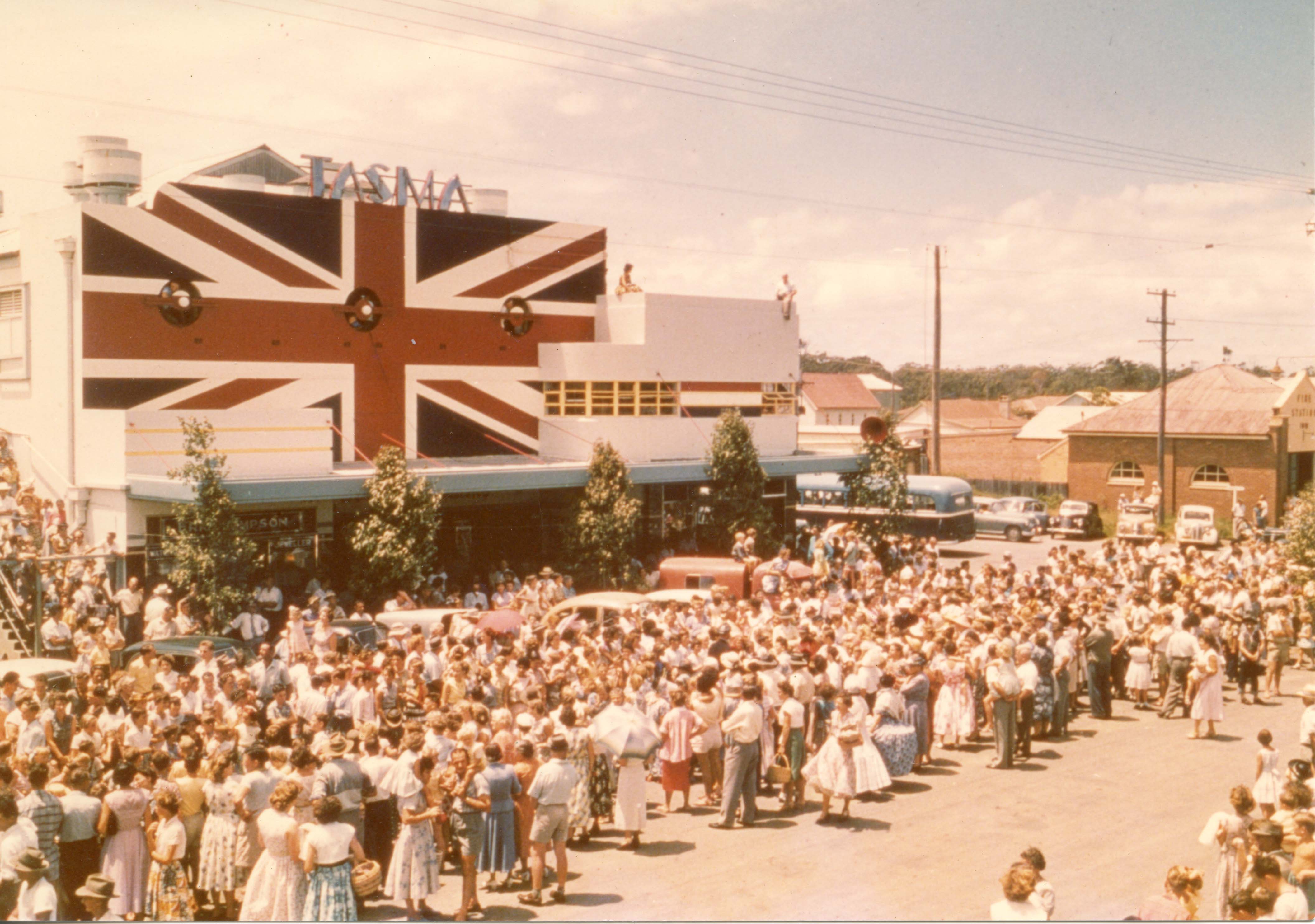 Tasma Theatre, circa 1954, Picture Coffs Harbour mus07-1438
Cinema in Coffs Harbour
In the early years, “moving pictures” came to town with travelling shows that used country halls and other places of public assembly. In Coffs Harbour, the venue was the School of Arts, a basic, hall-like building which opened on the north side of High Street, between Grafton and Castle Streets, in 1904. This was a vibrant centre of community life, used constantly for dances, balls, musical evenings, plays and public meetings. In 1908, it was significantly expanded and re-modelled, with a library and reading room added. From 1912, moving pictures were shown.

Opening of the School of Arts, 16 August 1904, Picture Coffs Harbour mus07-1430
In 1919, the School of Arts committee decided to show pictures themselves rather than leaving such a profitable undertaking in the hands of outside entrepreneurs. An excellent debut was reported: “with a six-reel Norma Talmadge drama and Charlie Chaplin at his funniest, screened by the latest 6B machine”. Mrs Minnie Franklin was employed as pianist to provide background music to the then silent movies. Films were also shown at the Fitzroy Stadium, which doubled as a roller skating rink and boxing arena! It was a rough and ready, open air experience.
In 1926, Lawrence Penn, later Jack Gerard’s partner in the Tasma Theatre, opened Penn’s Jetty Cinema on the site now occupied by the Forestry Building. Films were also shown at the Jetty Memorial Theatre when it opened in 1928 as the Soldiers Memorial Hall. Penn and Gerard later took over the leases at the Jetty Memorial in 1930 and the Coffs Harbour Picture Show at the School of Arts in 1932. The biggest news of the day was the introduction of the “talkies”. In November 1930, Broadway Scandals, an “all-talking, singing and dancing extravaganza” screened at the Jetty, followed quickly by the first talkie at the School of Arts a month later. In June 1931, Penn’s Jetty Cinema burned down in a serious fire.
For country people in particular, the cinema fulfilled two important roles – as a place for socialising and also for entertainment. Up until the 1960s, “going to the pictures” was the big social event of the week. People dressed up for this special occasion. At the Tasma, the program – two movies, newsreels, cartoons and the obligatory God Save the Queen – changed three times a week. Seats needed to be booked ahead on Friday and Saturday nights. The café next door provided drinks and sweets. Many a romance bloomed at the Tasma and a box of chocolates was mandatory. Unlike many cinemas in country towns, the Tasma was never racially segregated. Always the showman, Jack Gerard introduced Horror Nights. Although tame by today’s standards, the loud, spooky music in total darkness brought screams and squeals as patrons stamped their feet in delight. As Jack’s daughter Norma recalls, “the sounds and experience was incredible, and very scary, and LOVED by the people!”
When the Tasma closed in 1968, Penn & Gerard also stopped showing films at the Jetty Memorial Hall, however other operators continued screening there up until the building was bought by the Council in 1982. In 1988, a cinema (now closed) opened in Vernon Street, next to the Cinema Walk Arcade, and Birch, Carroll & Coyle’s five cinema complex on the corner of the highway and Bray Street opened in 1995 and is still in operation. The Sawtell Cinema, first opened in 1941, had been operated by three generations of the Brissett Family but was a casualty of the cost of converting to digital projection and closed in 2012. Due to an extraordinary fund-raising effort by the local community, the cinema was renovated, converted into two cinemas and reopened in 2015. Today, the Coffs Coast is a hub of cinema, home to the Screenwave International Film Festival and [REC] Ya Shorts Youth Film Festival.
The Tasma Theatre – Coffs Harbour’s jewel
The Tasma Cinema opened in March 1937 on the corner of Castle Street and High Street, as Harbour Drive was then known. With an imposing Art Deco façade, it was the grandest building in “Top Town” and became known as the “theatre beautiful”.
Designed by leading cinema architects Guy Crick and Bruce W. Furse, the Tasma Theatre offered big city luxury, seating 113 people in the Royal Lounge, 113 in the Dress Circle and 515 in the stalls – 741 overall. Crick & Furse were responsible for the design of numerous suburban cinemas in Sydney, as well as many throughout regional NSW. They favoured the Art Deco or Moderne style; the comfort and luxury of the buildings attest to the importance of cinema to Australian social life in the early to mid-20th century. As Everyone’s magazine commented in 1936:

Throughout the Commonwealth, comparative palaces now stand in pride as evidences of the solidity of the screen as the greatest medium of relaxation and edification of modern times.

The Tasma Theatre was the pride and joy of business partners Jack Gerard and Lawrence Penn. Penn was the original “Picture Show Man”, an old time showman who toured the countryside exhibiting films. In 1924, Jack Gerard became Penn’s trainee and they toured Queensland and New South Wales. After showing films in temporary locations in Coffs Harbour such the School of Arts and Memorial Hall, they realised their ambitions to open their own cinema when they formed Penn & Gerard Pty Ltd in1932.
The weather was horrendous on the night of the big opening on 15th March, 1937. Thousands of people milled outside while only 400 actually paid to attend the film inside – as Jack Gerard commented in later years, “just why the people of Coffs Harbour behaved in this strange manner, will never be known.” The film shown was The Big Broadcast of 1937 with Jack Benny, George Burns and Gracie Allen.
Over 31 years, 9627 films were shown, which according to Jack Gerard was “almost every American and British film produced at that time”. With the beginning of television broadcasting in Coffs Harbour in 1965, the Tasma began to lose audiences. It closed in 1968; the final film was After the Fox with Peter Sellers and Victor Mature. The building was demolished in 1969 to make way for the Waltons Department Store. When the mall was built in the late 1980s, the street layout changed and Castle Street no longer connected with Harbour Drive, so the Tasma site is no longer evident.
Jack Gerard and Lawrence Penn: impresarios
The Tasma Theatre was the dream of two fascinating characters in the story of cinema in Australia.
Jack Gerard was the manager of the Tasma Theatre – but also so much more. Councillor, car dealer, service station owner, amateur geologist, radio operator and innovator, advocate for surf lifesaving, projectionist and newsreel cameraman, Gerard was a well-known figure in Coffs Harbour and across the North Coast for decades. Born in 1907, Jack followed his curiosity and applied his intelligence in many fields. He was the first person on the North Coast to build a single valve wireless receiver for example. Above all, he was a natural showman. In 1953 he painted “Australia’s largest” Union Jack on the facade of the Tasma to mark the coronation of Queen Elizabeth II. Hundreds flocked to see A Queen Is Crowned when Jack secured the rights to screen this 1953 Technicolor story of Queen Elizabeth’s ascension to the throne. Betty Sara, the mother of the famous Bellingen quadruplets (the first set of quads to survive in Australia), won the Queen Elizabeth lookalike contest. A Queen is Crowned was screened simultaneously at Jack’s two cinemas, the Tasma and the Jetty Memorial. Paid admission reached 7785 – 1785 more viewings than Coffs Harbour’s population at the time! Jack received a letter of congratulations from the Queen herself.


He won Australian and international awards for showmanship, including for his promotion of Walt Disney’s Cinderella and the Australian film Robbery Under Arms, when he re-enacted the robbery in Coffs Harbour’s High Street. A keen “ham radio” operator, he had over 6000 world-wide radio contacts, including the Cuban communist leader Fidel Castro and his brother Raul! For 31 years, Jack filmed newsreels for Cinesound Review and Fox Movietone news. With the advent of television and the resulting decline in cinema, Jack produced features for television for a short while before retirement. His most popular newsreel was the 1953 coverage of five lions escaped from the circus who roamed the streets of Coffs Harbour.
Lawrence Penn was, as the Coffs Harbour Advocate described upon his death in 1952, “one of the most colourful figures in the Australian motion picture industry.” Indeed, the 1977 film The Picture Show Man was inspired by Penn’s life and was based on his son Lyle’s memoirs of them touring the countryside and showing films in the 1920s. He launched his film business in Newcastle but really established his career in Tamworth where he ran a large open air cinema. Following the death of his first wife, he took to the road in a horse and buggy as “Penn’s Pictures”, using a hand-operated projector and limelight. In 1924 he purchased one of the first Western Electric amplifiers and coupled it to a radio receiving set to broadcast reception. He employed Jack Gerard to demonstrate this new use of technology throughout the country towns of New South Wales and Queensland.
Lawrence reputedly had an “excellent baritone voice” and provided entertainment between pictures, along with his various trained dogs. His star performer was a cattle dog named Dempsey, regarded as “the cleverest dog in Australia” – he was filmed for world distribution in the early 1920s and was renowned among filmgoers. Penn settled in Coffs Harbour in 1930 and together with Jack Gerard and alone, ran many of the cinema venues in town. He retired in 1949, leaving Jack to run the Tasma in the final years.
Experience the Tasma Theatre at the Coffs Harbour Regional Museum
Take the time to enjoy some of Jack Gerard’s work on the screen when visiting the Museum to look at the cinematic items on display:
Former Jetty Memorial Hall and Tasma Theatre seating 1931, 1937
Timber, cast iron, upholstery
The row of timber chairs are some of the remaining, original 100 wooden seats installed in 1931 at the Jetty Memorial Theatre, then called the Jetty Memorial Hall, by Jack Gerard who had secured a license to screen films at the venue. The seats with cast iron bases were transferred from the Tasma Theatre when it closed in 1968. In 2016, both sets of chairs were donated to the museum when the Jetty Memorial Theatre upgraded its seating.
Tasma Theatre screening record book 1947- 48
Leather-bound book
The large ledger-style book records the films screened at the Tasma in the years 1947 and 1948. It shows the many different distribution companies Jack Gerard dealt with to deliver a varied and current program to Coffs Harbour audiences – he was proud of the fact that both Cinesound Review and Fox Movietone newsreels were broadcast simultaneously with Sydney and that the cinema showed all the latest movies. It also records the length of the film in feet!
Tasma and Memorial Theatre programs 1948 – 49 and 1955
Paper
Three monthly programs for the two theatres operated by Penn & Gerard. Every film screened at the weekends was classified as suitable for general exhibition, showing a commitment to children that paid off – they were the theatre’s most loyal customers to the end. As Jack later remembered, the children’s matinees were full houses while adult were “forsaking new and exciting film productions in colour and presented on a giant screen, in favour of viewing oldies in black and white presented on a tiny glass plate”- television.
Acknowledgement
Written by Joanna Besley, Curator, Coffs Harbour Regional Museum and Regional Gallery