The five Coopers Surf Shops in the Coffs Harbour district have their roots deep in the early surf culture [1] of the local area.  Bob Cooper began surfing in Malibu USA in the early 1950s, well before the “Gidget-Revolution” (circa 1960-62) popularised the sport.  As a competition surfer, he won the European Championship in 1969.  That same year Bob became a permanent Australian resident, and subsequently opened the first Coopers Surf Shop at the Jetty. He was able to bring aspects of the more “advanced” US surf culture with him [2].  The following 1979 Coffs Harbour Advocate article gives details of the first 15 years of the local surf-scene [3].  Surf culture is a global phenomenon now. 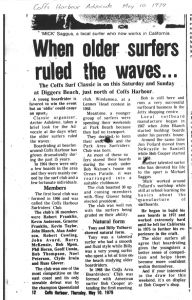 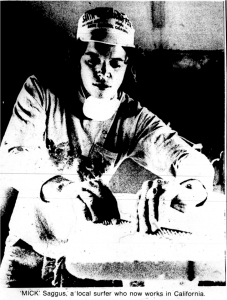 transcription of the article:

When older surfers ruled the waves…

The Coffs Surf Classic is on this Saturday and Sunday at Diggers Beach, just North of Coffs Harbour.  A young boardrider is favoured to win the event but an ‘oldie’ could cause an upset.  Classic organiser, Archie Ashdown, takes a brief look for the Advocate at the days when the older surfers ruled the waves:  Boardriding at beaches around Coffs Harbour has grown dramatically during the past 15 years.  In 1964 there were only a few boards in the area and they were mainly owned by the surf club and a few fortunate individuals.

Members:  The first local club was formed in 1966 and was called the Coffs Harbour Surfriders’ Club. The club’s 16 members were Robert Franklin, Kevin Anderson, Graeme Franklin, Kevin Taylor, John Blanch, Alan Anderson, Robert Cowling, John Avard, Barry McKenzie, Bob Moon, Phil Horan, Geoff Unwin, Bob Thompson, Noel Peterson, Clyde Irwin and Russ Glover.  The club was one of the most competitive on the east coast and its only sizeable defeat was by the champion Queensland club, Windansea, at a Lennox Head contest in 1968.  Meantime, a younger group of surfers were spending their weekends at Park Beach because they had no transport.  They decided to form their own club and the Park Area Surfriders’ Club was born. As most of these surfers stored their boards during the week under Bob Watson’s house on Ocean Parade, it was rearranged into a suitable clubhouse.  The club boasted 30 up and coming members with Tony Glover being elected president.  The club was well run with the surfers being graded on their ability.

Natural form:  Tony and Billy Tolhurst showed natural form.  Tony was a talented surfer who had a smooth and fluid style while Billy was a very young surfer who spent a lot of time on the beach studying older boardriders.  In 1968 the Coffs Area Boardriders’ Club was formed with American surfer Bob Cooper attending the first meeting.  Bob is still here and runs a very successful surfboard business in the Jetty shopping centre.  Local surfboard manufacture began in 1967 when John Blanch started building boards under his parents’ house.  Around the same time Jim Pollard moved from Newcastle to Sawtell while Bob Cooper started in 1968.  Another talented surfer who has devoted his life to the sport is Michael Saggus.  ‘Mick’ worked around Pollard’s surfshop while still at school learning the basics about the manufacture of surfboards.  He began to build his own boards in 1972 and worked extremely hard until he left for California in 1975 to further his experience in the craft.  The older surfers all agree that boardriding gives the youngsters a better sense of competition and helps them become more confident within themselves.  And if you’re interested in the draw for this weekend, it’s on display at Bob Cooper’s shop.

Don’t forget if you are interested in surf culture to also come and see the new exhibition Ripped Off at the Coffs Harbour Regional Gallery opening on 8th March 2019 and see how Jon Campbell, Robert Moore and Ozzy Wrong join Gerry Wed in looting and pilfering from the images of photo journalist John Witzig.

David Elfick, Alby Falzon and John Witzig produced the first edition of Tracks magazine in October 1970.  Its arrival in newsprint, with articles about music, places, lifestyle, the environment and politics established a distinctly counter culture orientation that defined surfing during its “golden age” of the 1960s and 70s.

See the ad below for Coopers surf shop from the first edition of Tracks magazine October 1970.  John Witzig was one of the founding editors of Tracks  and Coopers were one of the first advertisers. 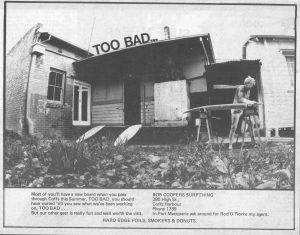 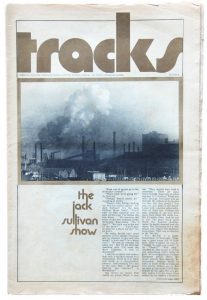