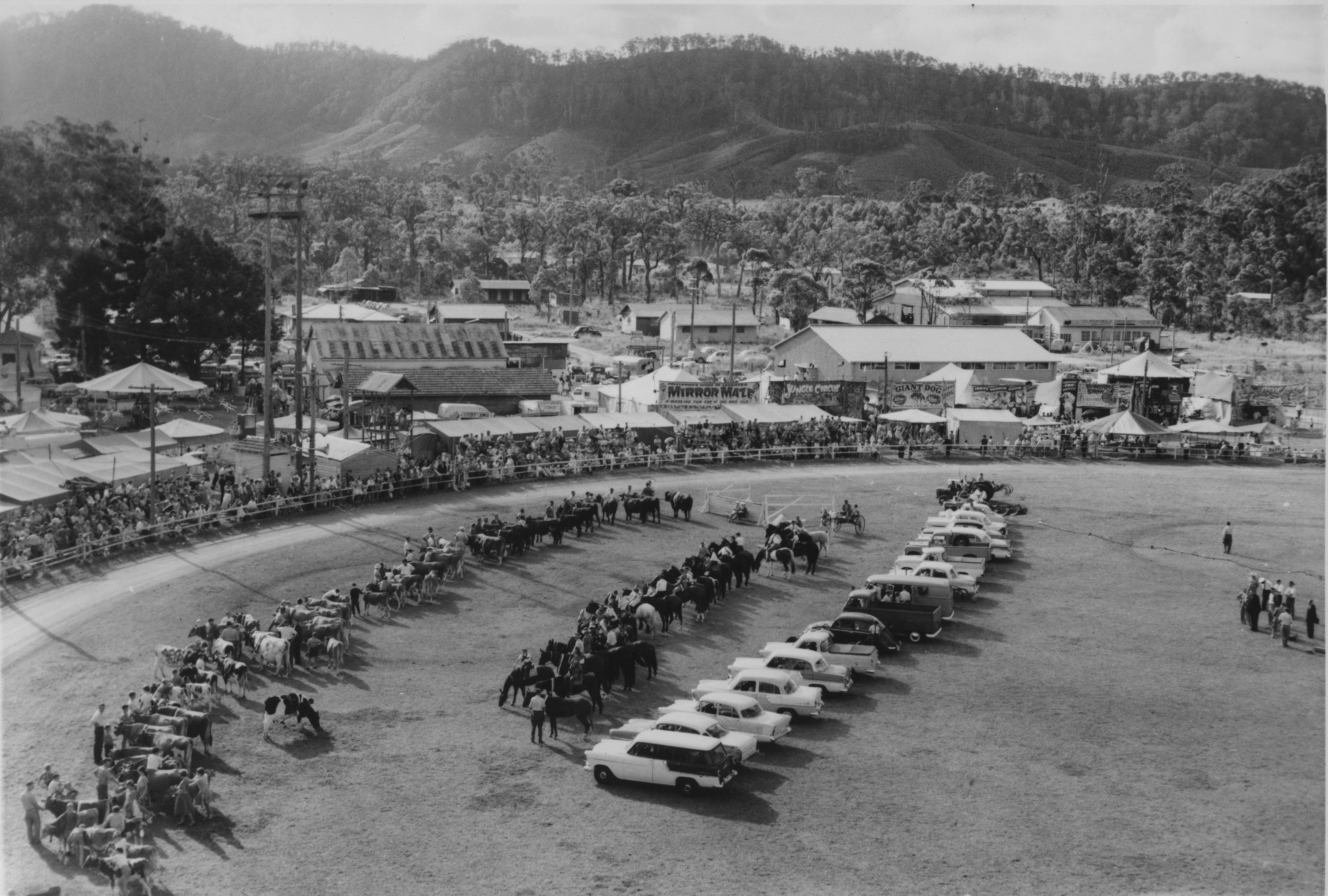 Who’s going to the show this weekend?  Have you ever wondered when and how the show started? What was it like back then?

The Coffs Harbour Advocate 22 April 1975 had a special Coffs Harbour Show feature written by local historian George England as below:

“HISTORY OF COFFS SHOW: FROM CEDAR CUTTING TO A FARMING, INDUSTRIAL VISTA.

The Coffs Harbour Show site has a history as old as the area it covers. Local historian George England here outlines some of the highlights.

In 1865-66 Walter Harvie and George Tucker with cedar cutters and aborigines camped on the showground site. They hauled logs and tilted them into the stream about where the present horse stalls are located.  The area was used as a slaughter yard in the 1880s.

A debate developed about 1912 on where to locate a showground at Coffs Harbour, with the choice being the site of the present Coffs Harbour Golf Course or north of Coffs Creek. The creek site won after much bitter squabbling. During the same year violent explosions from the showground area convinced many that their worst fears had come true and the Germans were attacking. However an investigation showed the disturbance was caused by an explosives expert demonstrating his skills. The ground was cleared and levelled by Mr. W. J. (Palmdale or Long Bill) Smith, assisted by Billy Perkins. The whole town turned out in full finery for the first show in 1914.  The ladies auxiliary provided lunch for a moderate charge.  There was a good response from dairy farmers who had stocks of differing breeds of cattle. Because there were no stalls, the cattle were tied to trees at the southern end of the ground where the present caravan park is located. Prize lists show there was splendid response from home vegetable and fruit growers.  J. Smith won many prizes for vegetables from his home garden and continued to do so for many years. Pavilion space was fully utilised. A problem of the early shows was that small boys used a convenient log to cross the creek and avoid the one shilling entrance charge.  When the log was blown up an enterprising lad brought his boat to offer passage across the creek for three pence. After two shows the war effort occupied the minds of farmers and show committees and the show was not held for a couple of years. 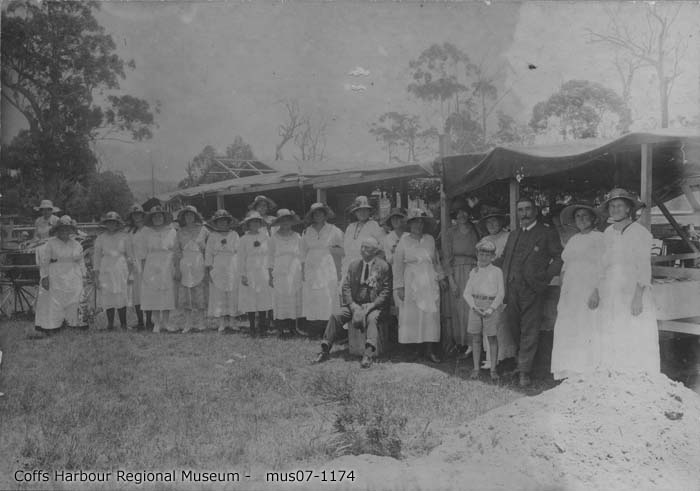 In 1928 the newly-formed Golf Club established six holes on the centre green and outside the fence, which provided a hazard for the golfers.  After two years the club moved to Mr. W. R. Smith’s farm at North Boambee. However they later returned to the showground site after an argument with the landowner. The need for an aircraft landing strip was on everybody’s lips about 1928 and the showground would be ideal. It was close to town and large enough for the planes of the day.  But it stayed as a showground.

During World War 11 the area was taken over by the Army and the headquarters of 3,000 men in the local area was established there.  A barbed wire gaol near the entrance gate was used as a detention centre for men who had gone absent without leave and been picked up by the provosts. No shows were held for three years during the war.  There have been suggestions to sell the land fronting the main street and use the money to develop the larger area at the rear of the present showground.

Coramba and Ulong both once had shows of their own. In 1905 Coramba staged a three-day show and Ulong held a two-day show. During 26 years of shows at Coramba, only one had fine weather. However both these centres lacked a large population and their shows eventually failed. One event that created interest and finally disquiet was the worst turn-out, in which a broken-down horse dragged a vehicle of unimaginable disrepute with a driver to match. Public boos and disapproval finally drove this event from the program.”

The award list from the second Coffs Harbour Show  1915 (Coffs Harbour and Dorrigo Advocate, 27 February 1915, p 2-3 found in Trove) speaks of a different time. The farm produce section had awards for the following fruits and vegetables:  potatoes, pumpkins, grammas, cabbage, leeks, carrots, rhubarb, chillies, vegetable marrow, squashes, rock melons, onions, celery, turnips, tomatoes, shallots, radishes, kitchen herbs, sunflowers, sweet potatoes, parsnips, French beans, beetroots, water melons, bananas, cucumbers, baking pears and oranges. The expression “grow your own” had real meaning back then, this impressive list of fruit and vegetables speaks of a time when the health of your family depended on you having a green thumb.