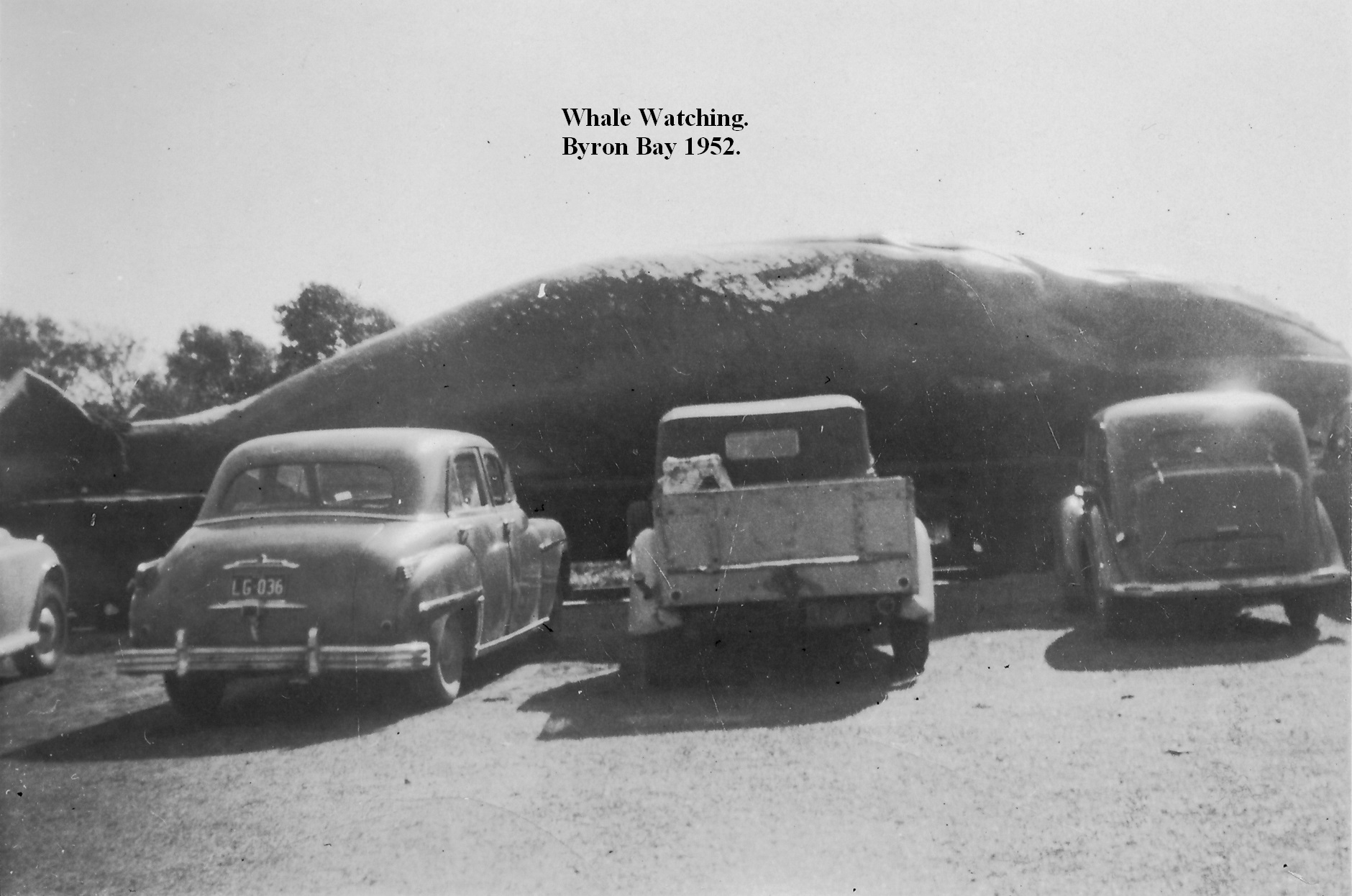 A mid-North Coast Tourist Authority was formed in 1956 [1], and Coffs Harbour’s first motel was opened in 1958 [2].  But not everyone was a supporter of this new-fangled industry.

In 1963, H.L. Bailey, not to be confused with Councillor Bailey, [3] sent the following letter to the Coffs Harbour Advocate. [4].

Sir, – Why are Coffs Harbour folk so apathetic to our tourist potential?

A large number of the Coffs Harbour community are not “apathetic” about the tourist potential – far from being apathetic they have very strong views, and they have no wish to assist in its development.

Consider the many disadvantages:

(1) In the long run property values tend to rise by inflation, and sites are utilised for furnished flats, cabins and so on, which should more properly be used for domestic housing.

(2) The tourist trade is bad for business, since a large number of shops are tempted to develop to meet the peak holiday trade. Temporary assistants are engaged for this period and are dismissed when business returns to normal. Those affected find it difficult to get steady jobs.

(3) When the size and number of jobs are governed by the peak tourist trade, rents tend to rise, and some businesses give up, fail, etc, and empty shops result!

(4) The tourist industry attracts outside capital, and frequently outside management. While there are many instances of local people developing tourist amenities, there are numerous cases where this development is in the hands and pockets of people who have come from outside the area.

(5) Tourism is the enemy of retired people. You are able to call to mind many places where elderly people have settled down in their own home, with reasonable rates to pay, expecting that their expenses would remain constant; with the development of tourism they have found property values increase and rates have jumped without additional benefits.

(6) Councils are persuaded to provide amenities for the tourist instead of for the average ratepayer. Precedence may be given to spending loan money on camping areas instead of playing fields.

Let those who benefit from tourism look after themselves. Let them provide the cabins and camping areas.  Let them provide the amenities and the entertainment, and let the poor ratepayers continue with their struggle to get from the Council adequate playing fields, residential streets that are not booby traps, public libraries and even civic centres. The ratepayer is more interested in the development of primary and secondary industry and backyard factories, than he is in the tourist trade.” (Coffs Harbour Advocate, 22 Feb 1963, p 3)

A week after this letter’s publication, Council became locked in a debate about the merits of tourism – when businessmen A. Heynatz and L. Mills came to town with a proposal to build a whaling station at Coffs Harbour. [5]

The Councillors were divided on this proposal, some arguing for tangible jobs, others concerned at the possible negative effect on tourism. Councillor F. Fountain cut-through everyone’s concerns by saying that a whaling station would be a tourist attraction. [6]

A month after the proposal was received, a decision in favour of allowing a whaling station was made by five votes to four. [7]

This, however, spooked the businessmen. Without strong Council support, Messrs. Heynatz and Mills decided to keep their money in their pockets. [8]

Local Coffs Harbour resident Gay Bell has a take on this story. In the 1950s, Gay’s parents took her to a popular Byron Bay tourist attraction – yes, the local whaling station.

“And there it was, the tell-tale sign of a ship listing heavily to one side, a sign of a successful harpooning with two dead whales being hauled towards the jetty. The crowd of onlookers at the whaling station anxiously waited for the jetty train to bring the whales up on the flatbed to be processed. To an eight-year-old this was an exciting event, in fact everyone was excited to see these huge creatures. How life has changed. Today I would have been appalled to witness this scene. It was so smelly and gory. A foreman gave a running commentary explaining the whole process. This was considered to be both entertainment and an educational form of whale watching, the complete opposite of today. Instead, we were fascinated watching the chained whale being winched up the ramp, its body dissected by men with extremely sharp flensing knives slicing through the blubber to expose the red muscle underneath. To further entertain the crowd, one worker cut off squares of blubber for people to have a taste.  We held our noses tighter against the smell and refused the offer, horrified, while the adults laughed. Even today I can still remember the smell and sight of the exposed whale. This event was in the late 1950s, just a few years before the Byron Bay whaling station was shut down.” 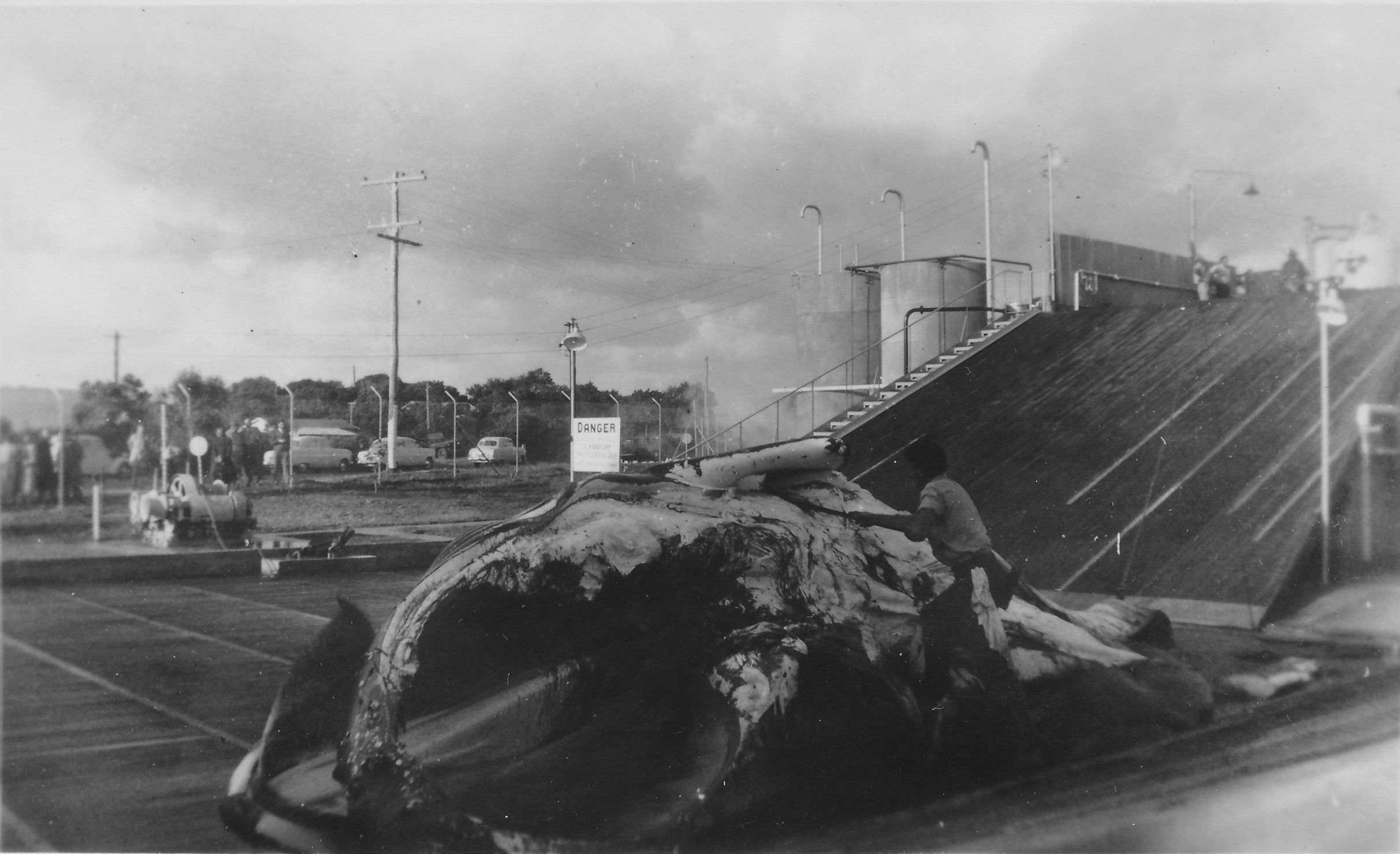