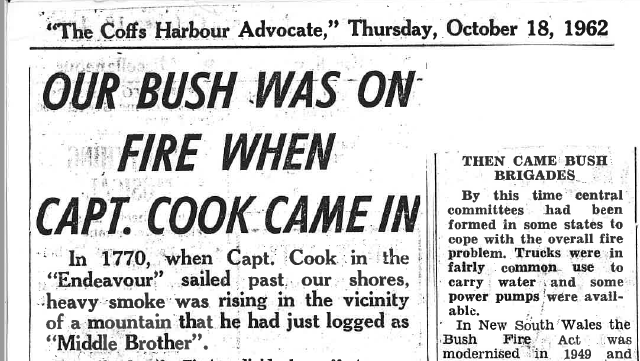 Bush fires are a constant in Australia and after three months of fires in our local region we are still intermittently shrouded in smoke and with bush fires still active, everyone is extremely thankful that we have a professional and able Rural Fire Service.  So when and how was it formed?

The Bush Fires Act which was passed in 1949 led to the formation of The Volunteer Bush Fire Brigade in Coffs Harbour in 1951.

This followed  a series of devastating fires in the region. Including what was known as “Black Monday” 20 November 1944, when several disastrous fires occurred in Boambee and Korora.  One of the fires started in West Korora and raged all the way to the sea, burning banana plantations, packing sheds and some homes.  Many of the local residents spent the night on the beach. One of the homes destroyed was Mr Tom Jordan’s and after the fire passed the water tank remained precariously tilted with the water boiling inside it.

1946 was again another bad year for fires and when these photos were taken they were fought by local residents working together in informal bush fire brigades with “green bushes , wet bags, chipping hoes and perhaps an odd knapsack spray, mainly possessed by the few banana-growers in the area’ (Secomb, Michael, Red Gold to Green Grass, 1986, P.78)

1950 was a very wet year with floods and cyclones, which resulted in the heavy growth of fuel.  This was followed by by a severe frost in July 1951 and then eight months of drought which did not break until March 1952.  After once again another series of devastating fires in 1951 when 22 000 acres was burnt in the Coffs Harbour area Cr Norm Jordan recommended the formation of a shire sanctioned volunteer bush fire brigade which was finally endorsed by the Dorrigo and Bellingen Shire Councils. This meant that combined with the Forestry Department effective bush fire protection could be instituted across the region which has continued to this day.

We thank our Rural Fire Service members for their unstinting service to the community and wish everyone a fire free and peaceful festive season.