During preparations for the launch of digital copies of Coffs Harbour High School’s annual magazine the Beacon [1] in 2019, a less well-known publication about the School came to the attention of the Cultural Development and History Services team of the Coffs Harbour City Council. 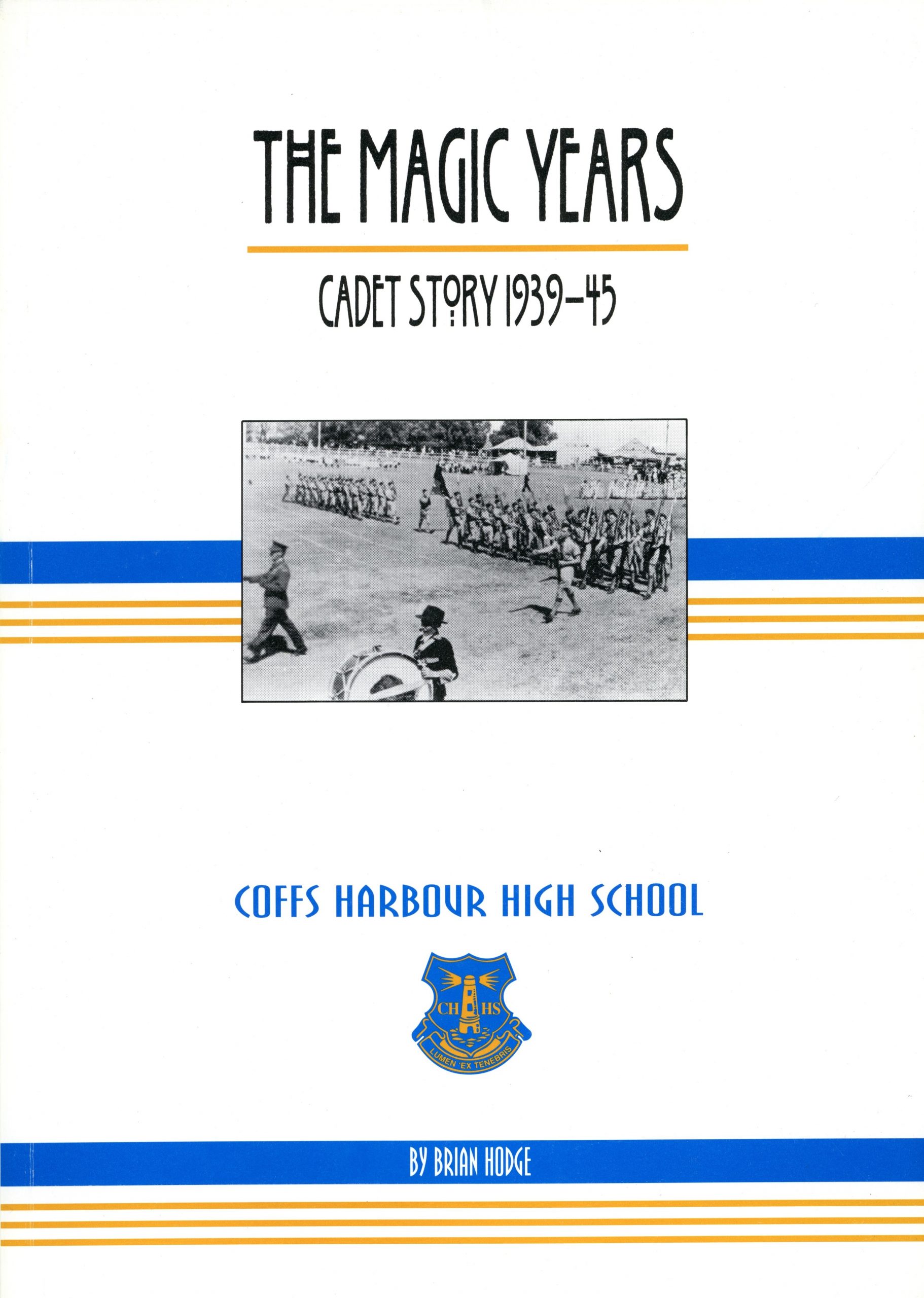 The Magic Years Cadet Story 1939-45, was written by historian the late Brian Hodge, a cadet himself. Brian and his family lived in Coffs Harbour from 1932 until 1945. His father, Russell Frederick Hodge, was the Principal of Coffs Harbour High School and a member of the Coffs Harbour Militia Unit. Captain Hodge had lived through World War I, also as a cadet, and that in addition to his beliefs, led him to propose and set up the Corp. [2]

Not wishing to miss out, a Girls’ Volunteer Corp was established in May 1942 – the first of its kind in NSW. The Magic Years does justice to their story too. It is a well-researched and well-written book. As Mr Hodge states in the Introduction, ‘the war years of 1939-45 were very special ones for us boys and girls in the Coffs Harbour High School Cadet Corp. The unit was very young and vigorous, and we kids were lively teenagers – “with eager unrest” – all very patriotic, all with pulses quickened by the threat Japan was posing to our coastline and to Coffs Harbour. Especially was this so in 1942.’ [3]

Was the Coffs coast really under threat during World War II?

Having lived through World War I, Captain Hodge knew it was best to be prepared and he acted on that in a very disciplined manner. Recent research by a Regional Museum volunteer led to the source of a sub-mariner’s maritime chart prepared by the Naval Department of the Imperial Japanese Navy in 1940.

This is a question often received by Museum staff. The short answer is yes. The cadets were issued with guns and ammunition, for use in training. They also trained with bayonets. Training camps conducted night patrols in the sandhills along Boambee Beach every school holidays, sometimes alarming the locals. And in the manuscript archive, a confession: “Did you know that a group of us fired live tracer bullets out of a Room 8 window the night Victory was announced? We used a Bren & tried to form patterns of Vs in the sky over the harbour.”

What happened to the missing years of the local newspapers?

As noted in The Magic Years, Brian Hodge found that some sources of Coffs’ wartime history have disappeared. In particular, although our continuing newspaper is available both before and after World War II, no copies of the Coffs Harbour Advocate between 1943 and 1945 remain. [4] The Museum holds just a few small cuttings as proof it existed. Mr Hodge filled in the gaps by sending out detailed questionnaires, and the resulting thoroughly researched publication goes some way to making up for this loss, describing not only the activities of the Cadets but also wartime life as experienced locally.

From Coffs Harbour to Hill End and back again

Brian Hodge lived in Hill End, a small town near Tambaroora. He was a member of the Hill End And Tambaroora Gathering Group [5]. A message asking about copies of the publication was responded to by HEATGG’s honorary librarian, Lorraine Purcell. Her intervention led to the donation of Brian Hodge’s research archive of the book to our Regional Museum, and during the height of the summer bushfire season, Mrs Purcell arranged for the safe transfer of The Magic Years to Coffs Harbour.

Copies of the book will be available for sale at various outlets when they open, and of course, at the Coffs Harbour Regional Museum.

[5] Hill End And Tambaroora Gathering Group has a website at www.heatgg.org.au/ with a shop link to publications.