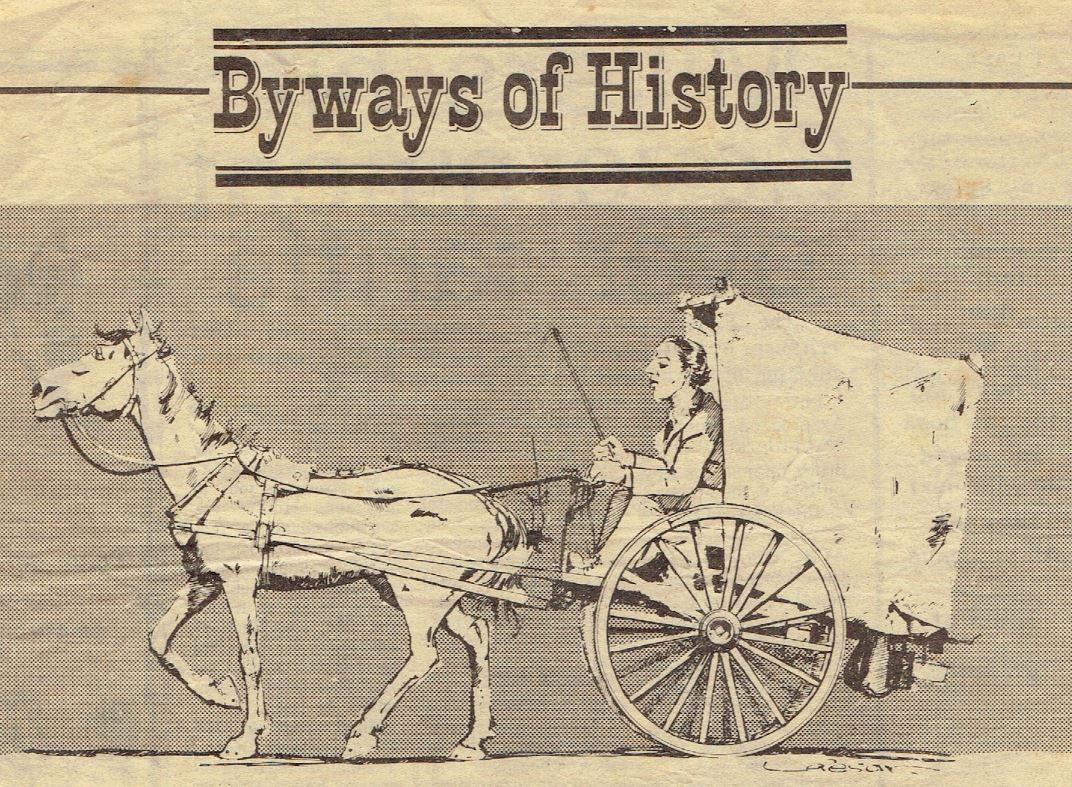 Louie La Crosse was born Ange La Craux in 1871 in Mauritius (Coffs Harbour District Family History Society). It is not certain how Louie came to Australia.  Joyce Franklin recalls him telling her as a child, that he came to here via Madagascar and landed in Western Australia.  From there he worked his way across the country on the railway line, his job being the “Billy Boy” for the linesman (Coffs Harbour City Council, 1986-1988). His obituary states that he was “shanghaied” from Mauritius, ended up in Newcastle and then worked on the railway up the coast to Coffs Harbour (“OBITUARY,” 1940).  However, he arrived he was a valued, respected and renowned character who lived in Coffs Harbour during the 1920s & 30s.

He is reported as arriving in Coffs Harbour in the first week of 1918 in an old sulky that was described as forerunner to the present-day caravan with a horse in poor condition.  He was well received by the residents in town, where he restocked his supplies before going onto Red Hill where the North Coast Railway was being constructed by Norton Griffiths (Thomas; Coffs Harbour District Family History Society). Unfortunately on his way up the hill his carriage fell over the edge which was very upsetting for Louie. He was given a job as the “Billy Boy” which did not last long as the contract was cancelled which resulted in all of the workers being laid off.

Louie then came to town and built a home out of beaten out kerosene tins (see picture below) and stayed for the next two decades until his death in February 1940. 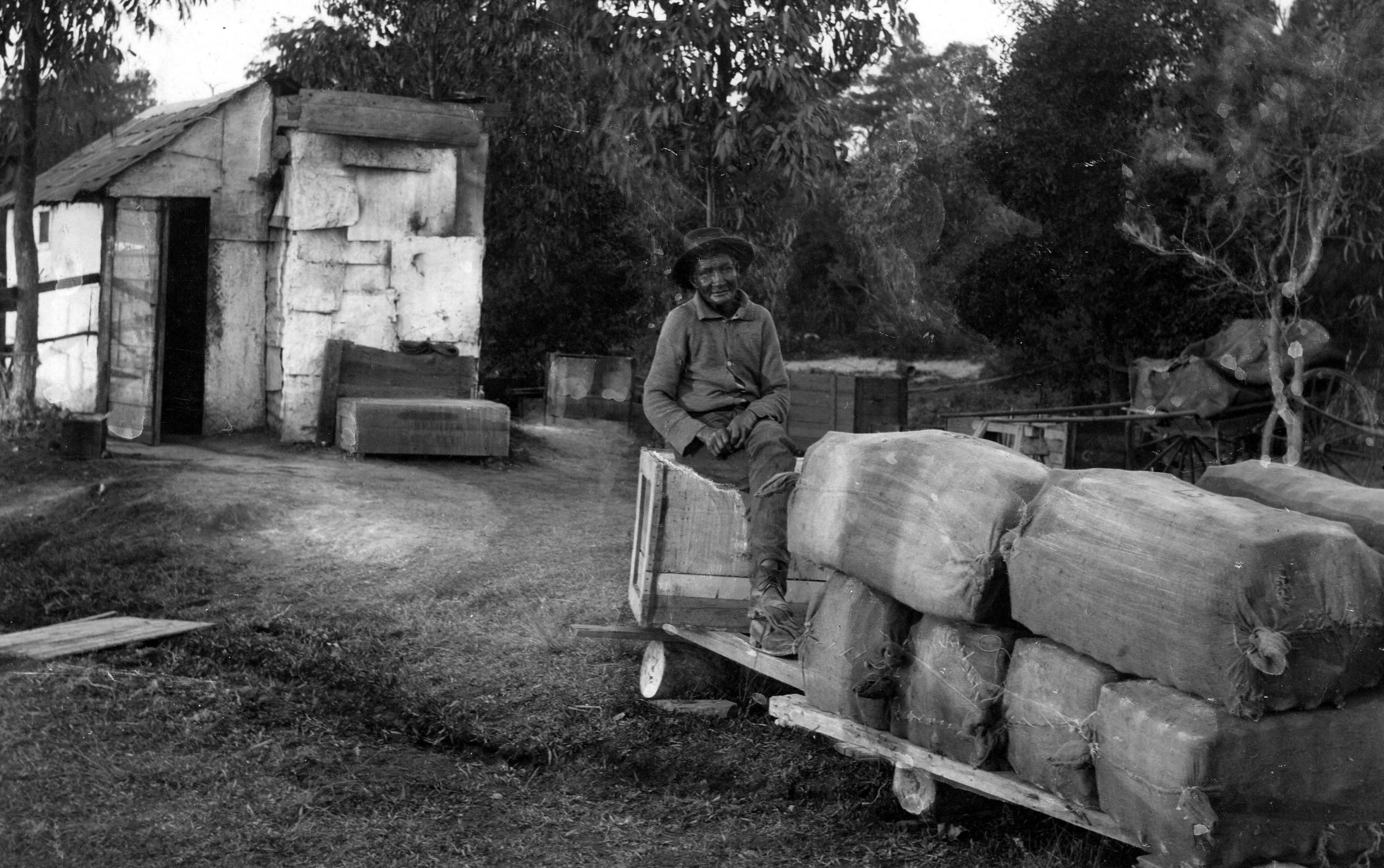 Louie outside of his home, Courtesy of Coffs Harbour Regional Museum.

He supported himself by doing general odd jobs for local business such as yard cleaning and then began collecting bottles, bones and bags.  He had a two-wheel cart described by Milton Smith as made out of a door with two sulky wheels and a couple of shafts that he pulled around town to collect his bottles and bones (see picture above) (Coffs Harbour City Council, 1986-1988). 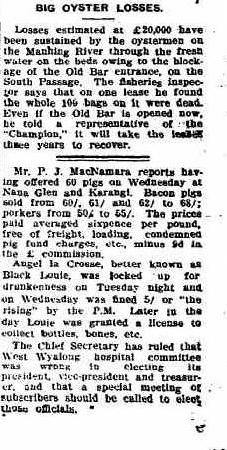 While it was apparent from the above clipping and resident’s memories that he did at times have one too many alcoholic beverages this did not seem to make people think any worse of him.  He was mostly well respected and cared for in the town and there were many who called him their friend. Kon Ruthning the local jeweler made some of his land available for Louie to build his kerosene tin shack near top town after he was moved off council land. Ruthning and Fred Lowery also bought him an accordion for Christmas one year which Louie used to play in the centre of town accompanied by his dog who used to howl.  Madge Durrington recalled him as “the music man, he always had his accordion with him, and in his straw boater and tie he would play, and we (the children) would dance around him and he would play as long as we would jump, to me he made us laugh.” There are numerous accounts of how he was very kindhearted especially when it came to children and animals.  Isabel Landrigan recalls as a child sitting outside Cunninghams all day with a crying Louie comforting him when a horse (perhaps his own) died in the culvert.  Joyce Franklin, whose father was the local blacksmith recalls that he was a friend of her father’s and used to often have morning and afternoon tea on the back veranda.  The family worried that he did not eat enough as he had a very slight build and was often “bronchial”.  When he was unwell her father used to deliver a billy of pea soup and at Easter, hot cross buns (Coffs Harbour City Council, 1986-1988).

He had a great talent for kite making and it was the goal of all the children to buy one of Louie’s kites.  They were made from bamboo and tissue paper and flew very well.  Douglas Harrigan remembers spending a long time collecting all the bottles he could find to get enough money to buy a kite. The cost was 9 pence and he eventually got one; at that time it was the “thrill of his life to get one of those kites”.  If you collected enough bottles you could also take them to Louie, and he would swap them for a kite.  Colin McGregor, whose father owned a local café, remembers sneaking a pound of butter when his Dad was not looking and swapping it for a kite.  He describes them as big box kites 3 foot x 2 foot, they had flaps on the sides and when you flew them over town you could hear them flapping in the wind. Joyce Franklin recounts that her Dad, the blacksmith, was very strict about the type of male company that she was allowed to keep growing up, but that he didn’t mind her and her siblings flying kites with Louie. Louie didn’t have any teeth, so their job was to “whistle up the wind” (Coffs Harbour City Council, 1986-1988).

He also was talented as a craftsman and artist.  Joyce Franklin recalls that when The Fitzroy sank in 1921 Louie drew a particularly good picture of the ship sinking and all his bottles floating away.  He would send his bottles and bones (the bones to be turned into fertilizer) to Sydney every month or two and the sinking of the Fitzroy meant he had a very lean couple of months ahead of him. 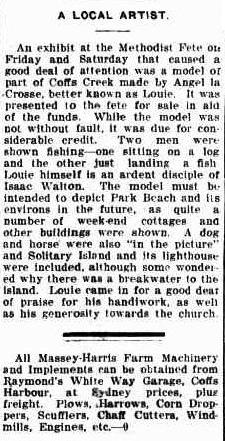 Yet, there was a flip side to how some people in Coffs thought of and treated Louie. There were some children who feared him, and some of the boys and even adults used to play tricks on him.  His home was on the main route between town and the primary school so children sometimes would run past in fear, some would try and spy on him and others play “jokes”; Bill Payne recalls telling him “that the lions were after him”.  Colin McGregor who thought of Louie as a friend and used to often visit him, remembers making a “mistake” when being dared to call Louie “black” and Louie chasing him back home where he hid under a table. When his father found out, Colin got “a swift kick in the backside” for doing it.  Muriel Brennan recounts an incident when a boarder of her mother’s put something on Louie’s horse to “make it go hell for leather, he thought it was a great joke, poor old Louie was hanging on for dear life”.  There were even doubts about his gender according to Joyce Franklin, because he did not have any facial hair.  One day some high school boys (about 18 years old) decided to strip him to check his gender.  It happened outside the blacksmith shop and her Dad broke it up, Louie was terribly upset and cried (Coffs Harbour City Council, 1986-1988).

Louie was religious and went to mass regularly and when he died a collection was taken up to pay for his funeral and headstone, as a sign of respect and of how well-liked he was in the community. As narrated by Yeates “The number of important citizens who attended the funeral of this man without any of his own kin was a tribute to him” (Yeates, 1990, p. 254). 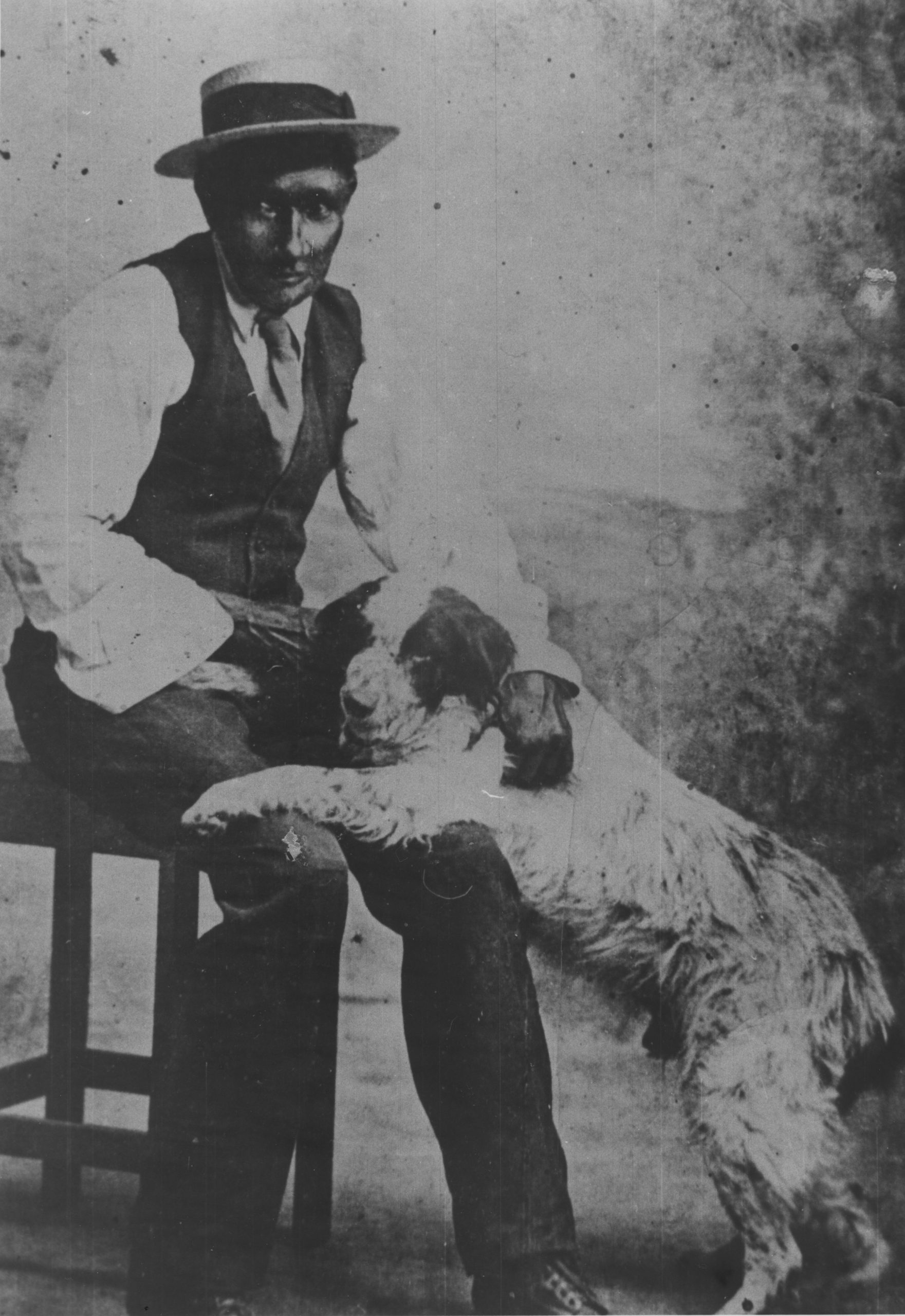 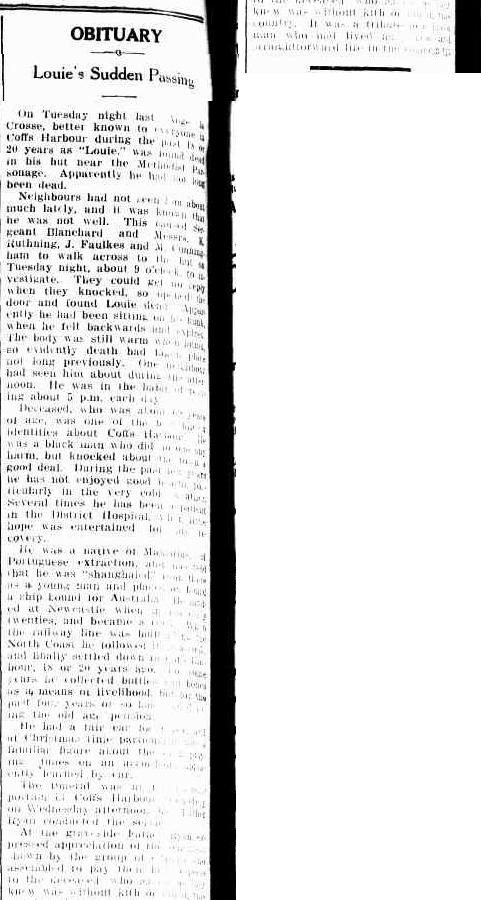 On Tuesday night last Angel La Crosse, better known to everyone in Coffs Harbour during the past 15 or 20 years as “Louie,” was found dead in his hut near the Methodist Parsonage. Apparently, he had not long been dead. Neighbours had not seen him about much lately, and it was known that he was not well. This caused Sergeant Blanchard and Messrs. L Ruthning, J. Faulkes and. M. Cunningham to walk across to the hut on Tuesday night, about 9 o’clock, to investigate. They could get no reply when they knocked, so opened the door and found Louie dead. Apparently, he had been sitting on his bunk when he fell backwards and expired. The body was still warm when found so evidently death had taken place not long previously. One neighbour had seen him about during the afternoon. He was in the habit of retiring about 5 p.m. each day. The Deceased, who was about 69 years of age, was one of the best-known identities about Coffs Harbour. He was a black man who did no one any harm but knocked about the town a good deal. During the past few years, he has not enjoyed, good health, particularly in the very cold weather. Several times he has been a patient in the District Hospital when little hope was entertained for his recovery. He was a native of Mauritius, of Portuguese extraction and has told that he was “shanghaied” from home as a young man and placed on board a ship bound for Australia. He landed at Newcastle when in his early twenties and became a cook. When the railway line was built along the North Coast, he followed it as a cook, and finally settled down in Coffs Harbour, 15 or 20 years ago. For some years he collected bottles and bones as a means of livelihood, but for the past four years or so has been having the old age pension. He had a fair ear for music, and at Christmas time particularly was a familiar figure about the town playing tunes on an accordion, apparently learned by ear. The funeral was at the Catholic portion of Coffs Harbour Cemetery on Wednesday afternoon, Father Ryan conducted the service. At the graveside Father Ryan expressed appreciation of the sentiment shown by the group of citizens who assembled to pay their last respects to the deceased, who as far as they knew was without kith or kin in this country. It was a tribute to a black man who had lived an honest and straightforward life in the community. (Yeates, 1990)