The Coffs Harbour Regional Museum is pleased to announce our new exhibit – a 1:25 scale model of the original Coffs Harbour Police Station and Courthouse – our Museum building!  This delicately made model has been a labour of love over the last 18 months by a local craftsman and heritage enthusiast, Don Langley.  It comes complete with miniature people, furniture, lights, animals, and fine detailing that is bound to engage people of all ages who see it. 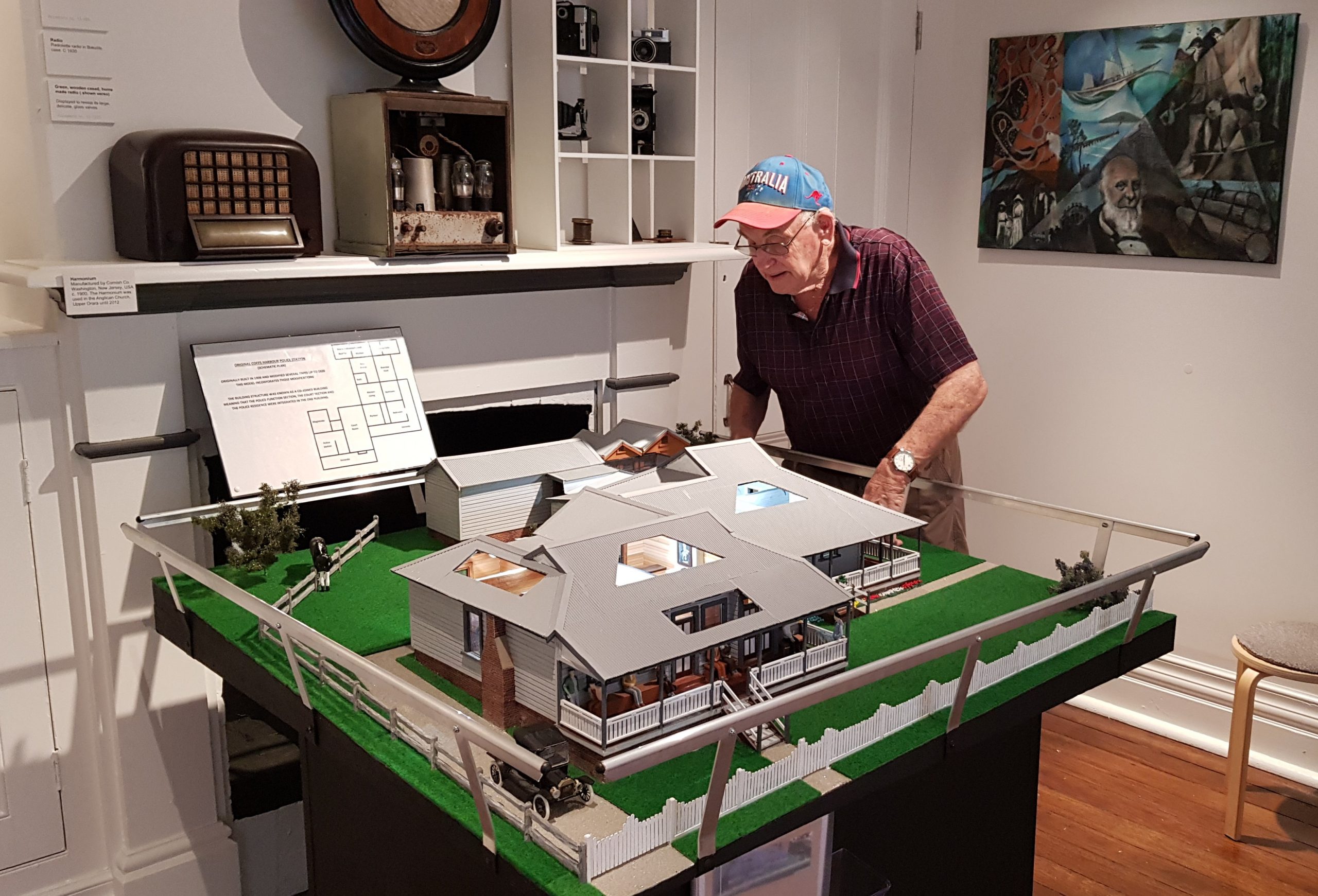 The Coffs Harbour Police Station opened in 1906 following “complaints of drunkenness in the street and disorder at dances” (Coffs Coast Advocate, 2001).  The existing Coramba Police Station, established in 1896, was  twelve miles away on horseback and considered too distant to respond to immediate problems in the Coffs Harbour area.  Senior Constable Belson and Constable D.M. Harper were the first men to operate the new police station (Yeates, 1990, p. 107).  In 1907 the building expanded to include the courthouse. It contained a courtroom, a Clerk of Petty Sessions,  a magistrate’s room, offices and living quarters for the policemen, two cells, an exercise yard, a forage room and a two-stall stable.  The building was used in this capacity until 1930 when the Moonee Street Police Station and Courtroom opened (Yeates, 1990, p. 185). 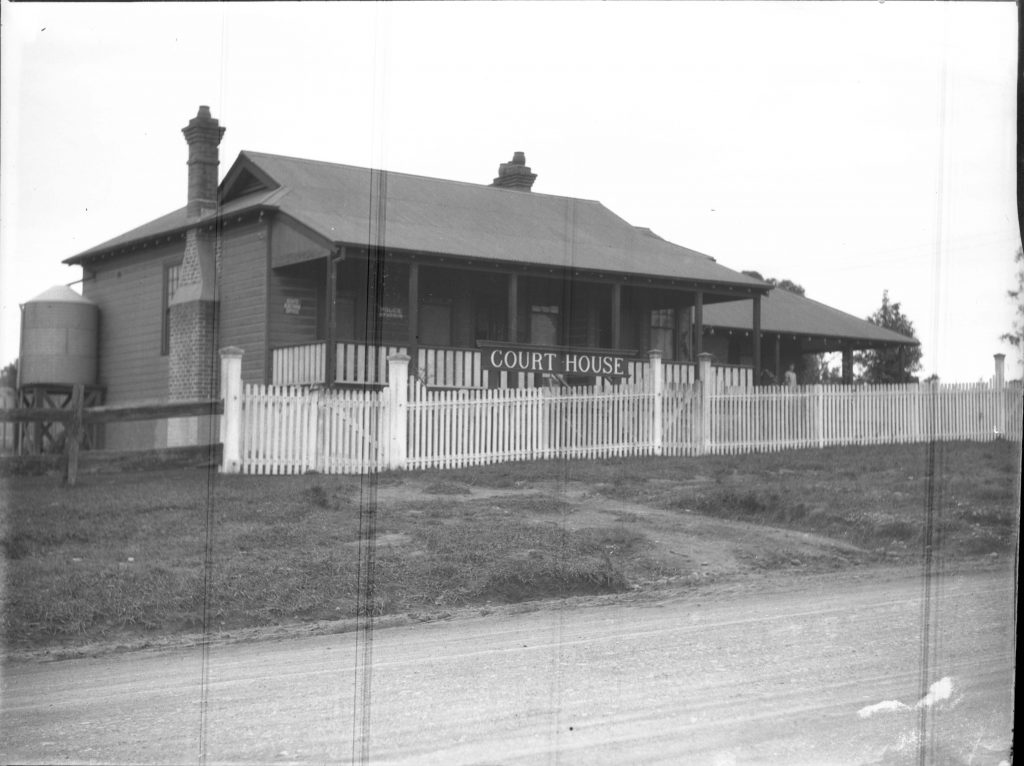 Don Langley has written an account of his experience researching and building the model.  Below is his story:

The title – “Original Coffs Harbour Police Station” is a somewhat misnomer.  According to the records I have been able to access, the Police Station construction begin in 1906 or thereabouts but several times, up to 1920, the building was subject to a number of additions and modification.   What I decided to do was make the scale model as close to its structure at that time (1920). 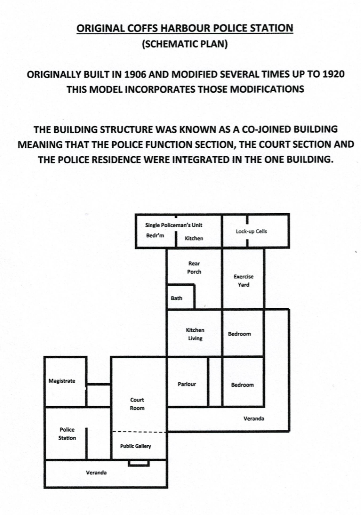 In the researching process I could find no plans of the original building or the modifications up to 1920.  It appears that severe flooding at one time destroyed a large amount of the Council archives and the plans for the Station may have been victim of those floods.  As a consequence I was unable to ascertain the type of quite a few construction materials and specifications causing a considerable amount of guesswork.

For instance, what was the external cladding?  Several old photographs of early Coffs Harbour buildings such as the Arts and Crafts building and the original Surf Club headquarters quite clearly indicated that the weatherboards were rough sawn square edge boards.  From the photographs I guessed that the weatherboards may well have been produced using local cedar timber.  The records indicate that the original building was designed by the Government Architect, W.L. Vernon. From my past experience it seemed that such weather boards would have been too “lacking in finer quality” for an architectural designed building and the architect would have specified something better looking.  Thus it seemed to me that the “shiplap”weatherboards on the present building may well have been the original style.

What would have been the finish to the internal lining boards in the original Courthouse/Police Station?  My guess is that in accord with such buildings that have been preserved to a greater degree than the Coffs Harbour building e.g. Port Macquarie Police Station and Courthouse, the finish to the internal lining was stained and polished timber.  This is how I have displayed it even if the colour may well have been quite different.  Then I considered the internal lining of the residence.  It seemed to me that residences attached to public buildings did not receive the grandiose finishes as the public buildings did.  So my assumption was that the lining boards and general finishes in the residence were painted in bland colours and, whether that was so or not, this is what I have done.

Other materials were easier to establish.  Corrugated iron roofing was common even in those days and though there may be some conjecture as to whether wooden shingles could have been used corrugated iron seems a more plausible material.  However the original may have been replaced at time of additions and modifications.  Nevertheless shingles could well have been the original roof covering as cedar shingles have been produced from local timber sources for many years and not so long ago I was talking to a district saw-miller who stated he was cutting cedar shingles for a government entity.

The flooring was/is timber with the prisoner exercise yard being concrete.  Likewise the residence wet areas.  As said original records seem to have disappeared so much of my work was calculated guesswork.  The brick base to the building is accepted as original.  In research I could find no evidence at all that the bricks may have been made locally so I assumed that they were imported, most likely from Grafton.

Though the few plans available indicated where they were located on site there was no other information other than that they were portable.  Incredibly I found out that one was still in existence and furthermore was in the locality – in the backyard of the Sawtell Police Station (now not in operation).  I was able to inspect it and take detailed measurements and photographs.  Thus I was able to accurately reconstruct the cells in the model.  I might add that the cells were not made in a joinery shop but appeared to be made at the sawmill where the timber was produced.  One thing is certain they were made robust enough to be transported as well as adequate for prisoner confinement. 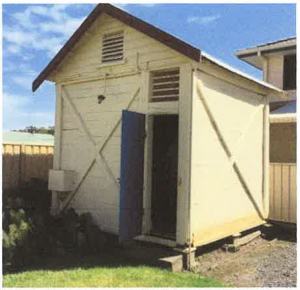 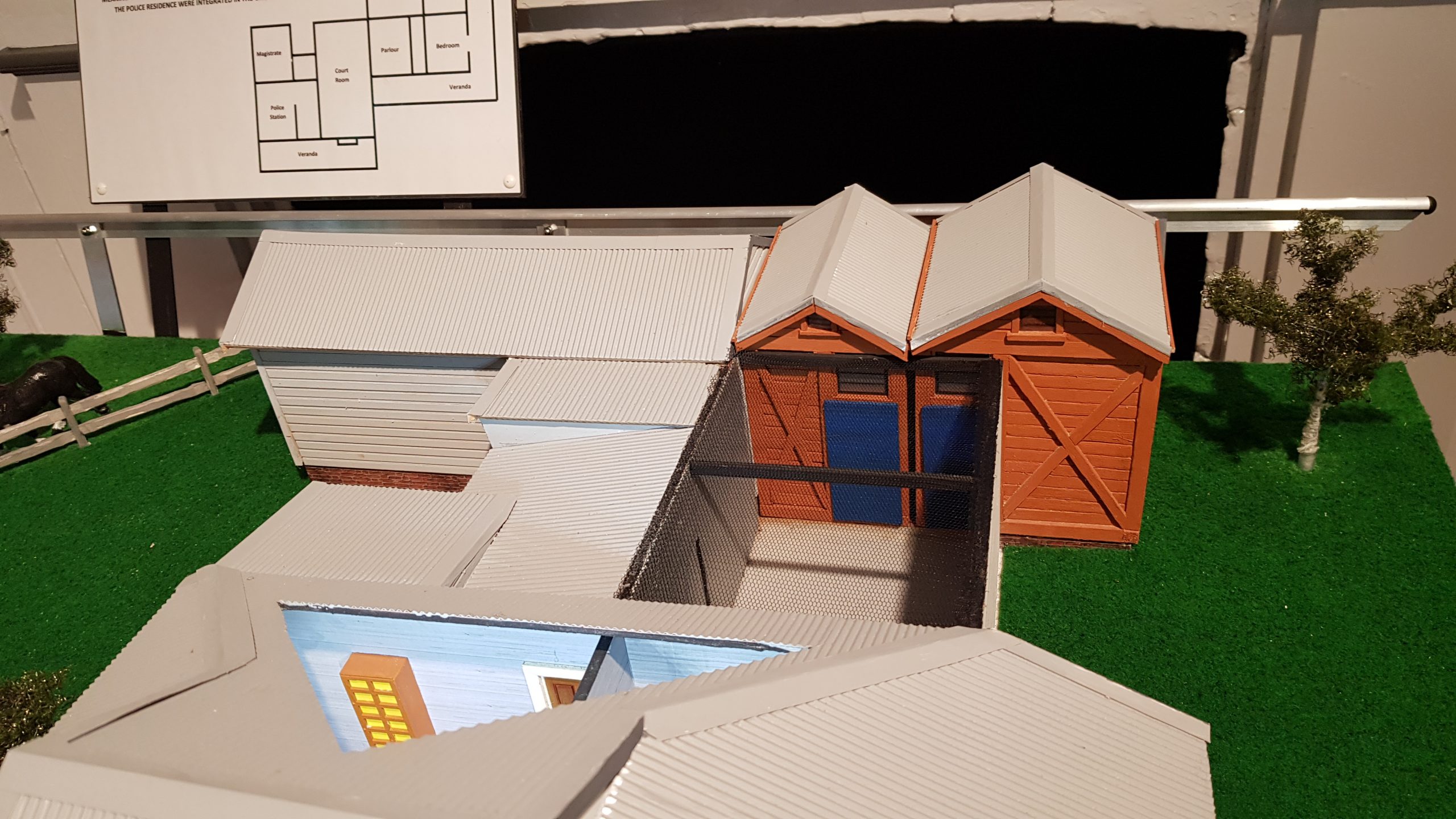 Brief description of how various linings were produced for the model

General construction:  Floor, walls and roof were made from 5 mm MDF board, it being more stable than plywood and available in larger area sizes that balsa wood though some plywood was used.

Base brickwork:  This was achieved by Googling up panels of brickwork on the internet, selecting the most appropriate and saving it on my PC, then enlarging/reducing the panel to the scale I was using.  I made the individual brick in the panel 9 mm x 3 mm representing 1:25 scale of standard bricks 225 mm x 75 mm in size. Having then achieved this correct scale I reproduced as many panels as I wanted and packed them side by side in rows similar in appearance to a wall of brickwork.  This I took to a commercial printer who was able to produce a continual panel some 4 meters long on heavy paper.  This enabled me to cut the paper to sizes I wanted.  Finally the paper was pasted to plywood base.

Internal wall lining: Basically I used the same principle for the brickwork but I was limited to finding on the internet the exact patterns I required.

Corrugated iron for the roof: This stumped me for a while.  I tried to find a mould with a stamp to press aluminium foil into corrugations but was not successful.  I could not get a mould to true scale.  Then a friend showed me some corrugated paper which was exactly to scale but needed to be painted.  I was able to find a colour matching weathered corrugated iron.

Flooring:  The flooring was 5 mm x 0.5 mm strips of mahogany which I glued to a plywood base piece by piece.

Ground contours:  The base for the building was formed on a flat base and the ground contours were formed by moulding polystyrene sheets to the contours required.

Lighting:  I used small LED lighting strips fixed to the underside of the roof.

Research by Don Langley in accordance with current information.

Make sure you visit the museum to see this wonderful model, you can find out our current opening days and times on the Coffs Harbour Regional Museum website. 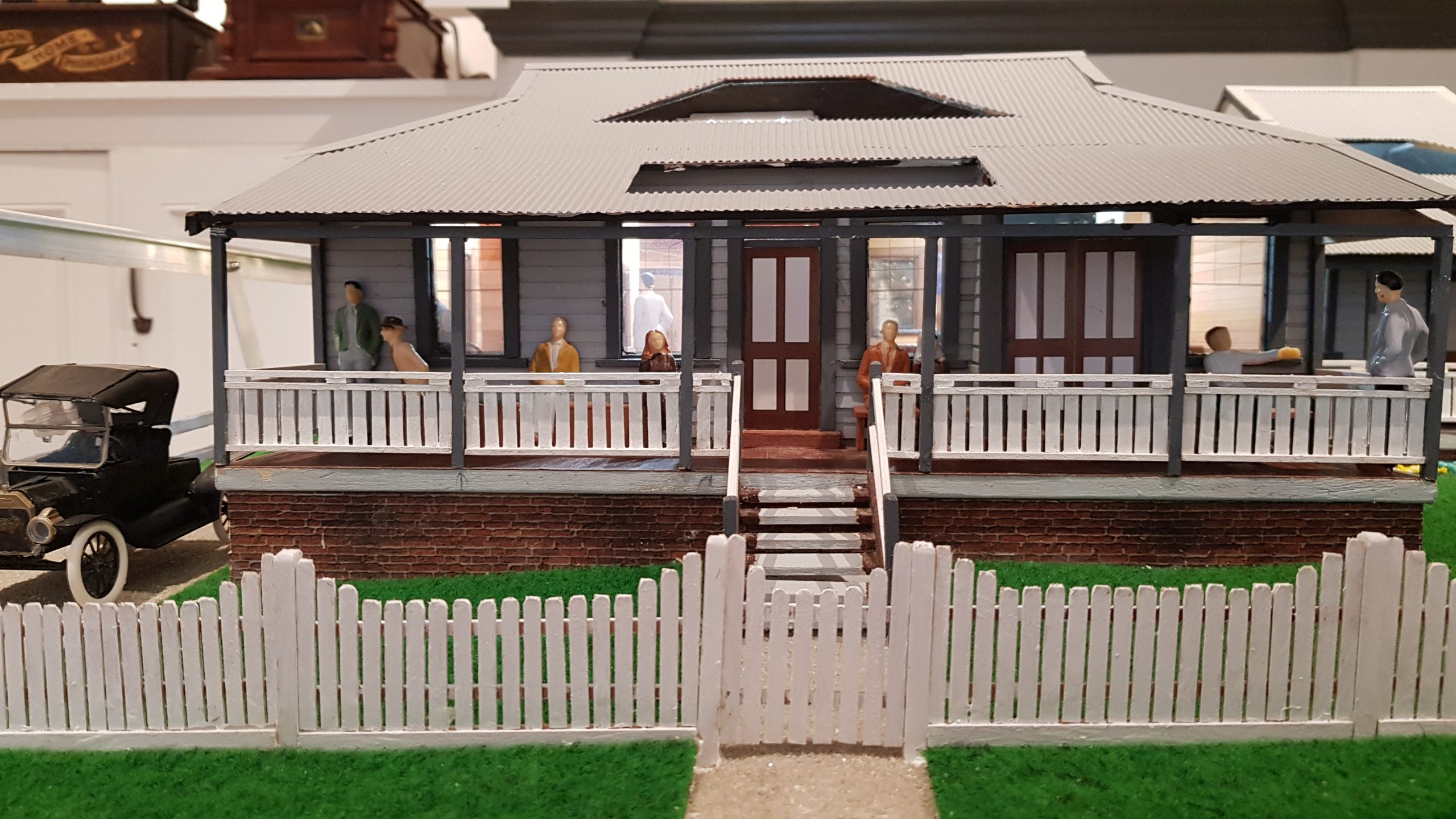