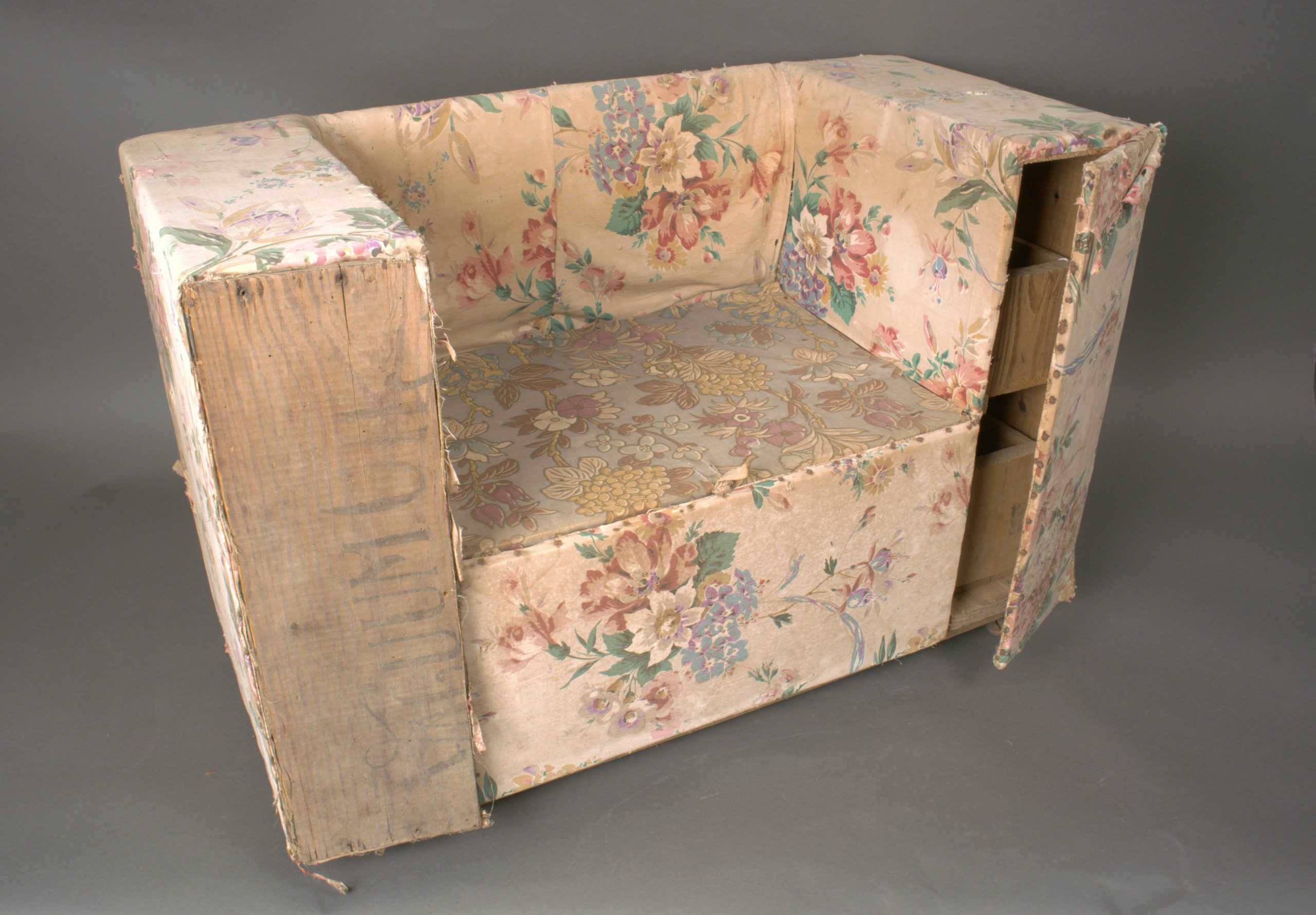 While it may have an initial unprepossessing appearance this chair is a uniquely handmade gift from the Fraser family given to their friends the Williams family .  The chair is was made from old kerosene packing cases from the Vacuum Oil Company and Plume Motor Spirits & Kerosene.  It is upholstered in two kinds of floral fabric. It was made by Henry ‘Harry’ Fraser, and was most likely upholstered by his wife, Elizabeth Grant Fraser. The packing case chair was a gift to Ivy Williams (nee Dent), the matriarch of the Williams family, with whom the Frasers first lived upon arriving in the Coffs Harbour area in the early 1920s. It is estimated that the chair dates from around this time.

The Frasers and the Williams lived in an area of Coramba Road that was previously known as ‘Orange Trees’. This site is now home to a plant nursery, but was once largely covered with banana plantations and tomato fields. When the Frasers moved out of the Williams home, they built their own home not far away. The donor remembers them as ‘Uncle and Aunty Fraser’. Ivy Williams kept the chair in her bedroom. When she passed away, the chair was handed down to her daughter Daisie Nelson (nee Williams) who used the chair for sewing and reading – the drawers in the arms were used to hold sewing equipment and magazines were kept under the seat. The chair was subsequently handed down to Daisie’s daughter Jill who donated it to the Coffs Harbour Regional Museum. All three generations of women lived on the same site and used the chair in intimate, quiet spaces of their home.

Domestic furniture made from packing cases and other recycled materials was commonplace in the early 20th century. Though usually associated with the Great Depression of the 1930s, this kind of ‘bush carpentry’ was made in remote locations decades earlier due to the lack of access to furniture makers and the funds to purchase pre-made items. Soldier settlers and people leaving the city for the country were often supported by organisations like the New Settlers League of Australia. The League produced a booklet titled ‘Makeshifts’ that included instructions on how to make furniture from packing cases for every room in the house. A very similar chair design illustrates the cover of the 1925 edition. It is not out of the question that the Frasers may have been aware of this booklet, or that the construction of these objects came from a local, vernacular knowledge passed between neighbours and communities. 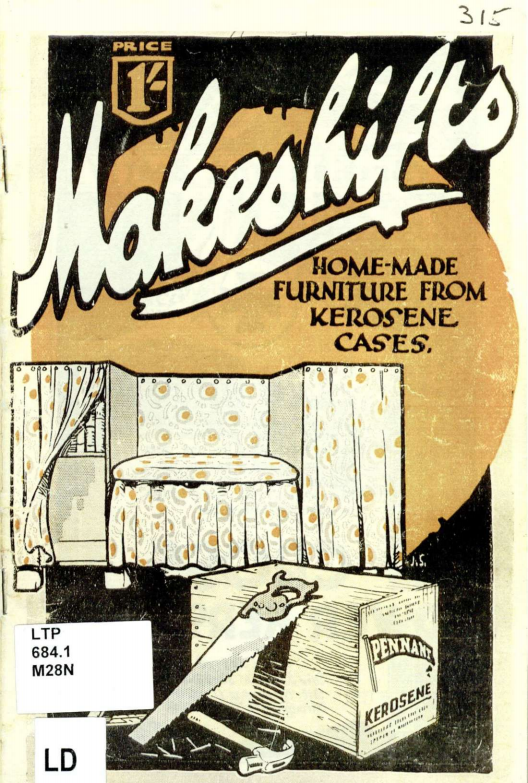 The Makers – The Fraser Family

Henry Murray Fraser, known as Harry, married Elizabeth Grant Fulton in 1915 in Kogarah in Sydney. Harry Fraser was a fitter at the Eveleigh Railway workshops and Elizabeth worked at the Children’s Hospital in Camperdown. Harry left his work at the Railway workshops because of ill health. Subsequently, the Frasers moved to Coffs Harbour in 1921, when Harry went into business with his cousin George King and helped him run a traction engine (a self-propelled steam engine, also known as a road locomotive) in Coffs Harbour [1]. 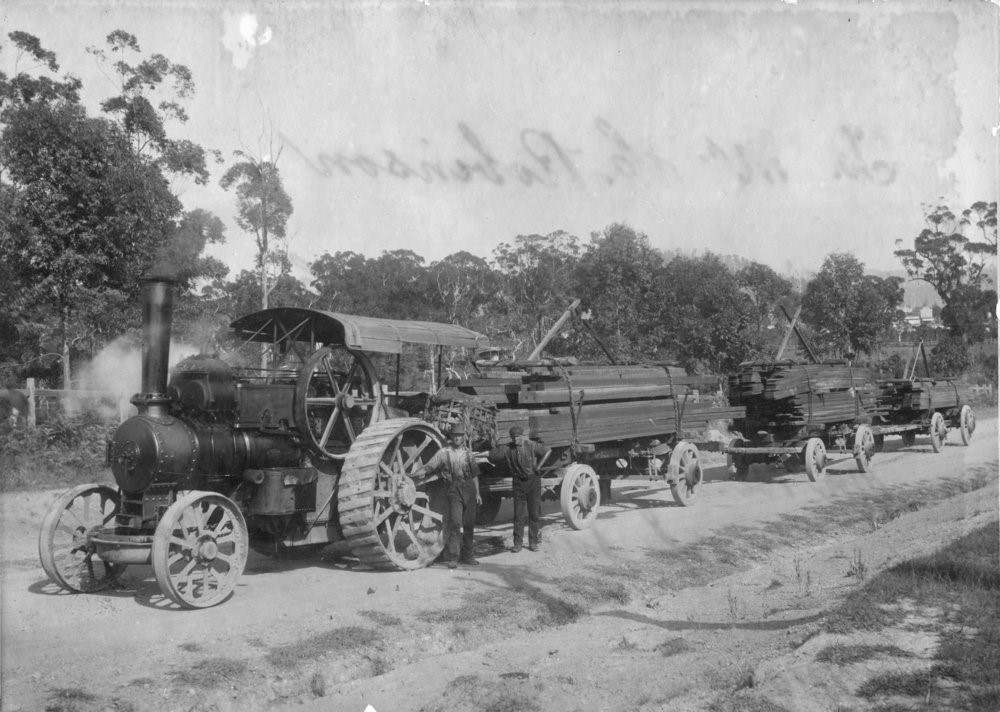 They hauled sawn timber from Mackenzie’s sawmill at Coramba to the jetty at Coffs Harbour. It wasn’t without its hazards: 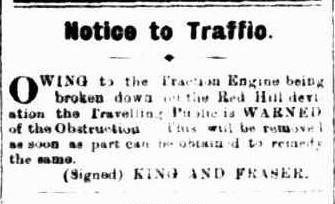 Harry and Elizabeth moved back to Sydney briefly and returned to Coffs Harbour for good in 1924, around the time the chair was built. They lived out at ‘Orange Trees’ and became market gardeners, growing tomatoes and bananas.

A Note on ‘Orange Trees’

In mentions of the Frasers in newspapers, ‘Orange Trees’ is given as their place of residence, as if it were a suburb. According to an old label for the packing case chair in the Coffs Harbour Regional Museum, “Orange Trees is an area centered on the present Total Gardens Nursery, which stretched from Buchanan’s Road to Bennett’s Road.” [2]

Orange Trees is part of a broader area that was selected by a man called Thomas or Tommy Albert. Yeates (1990) makes a note of the origin of the name: “James Marles chose two blocks adjacent to Moller, while Thomas Albert went a mile or so to the west where he tried his luck growing citrus. However, he sold his 160 acres in 1887 when his five-year term for conditional purchase expired, and his stay is now remembered by the naming of Orange Trees Road.”[3]

Museum Volunteer Marie Davey (2012) discovered the following about Albert and his land:

“Aged nineteen, Tommy Albert came south to Coffs Harbour after hearing stories of the good land available to settlers. Choosing a site between the present town of Coffs Harbour and Red Hill, he applied for 160 acres (64.75 hectares) on which he intended growing sugar cane.

However, after assessing the immediate needs of the tiny settlement, he switched to growing corn for the increasing number of bullock teams, and fruit and vegetables for his own use and for the families of the timber cutters. On his selection, Tommy Albert built a dwelling of slabs and invited his fiancée down from Grafton to view her future home. Unfortunately she was not impressed with the house, or the neighbours and quickly returned to Grafton.

Tommy stayed on working his selection with little success because of the roughness of the terrain and the poor quality of the soil. Finally he took outside work for Marles a neighbour, ploughing jobs for James Small at Korora, helping on the survey of Boambee and assisting Eugene Rudder over Red Hill at Coramba.

Tommy stayed on his selection for five years until his term of occupancy ran out. He sold his farm for twenty-five pounds but his labour on the barren soil had not been in vain, as his fruit trees, the only ones in the district, survived and the area became known as Orange Trees.”[4]

Orange Trees is also described in newspapers up until at least the 1950s as a distinct suburb during a load-shedding schedule [5]. At one point, it even had its own tennis team [6]. 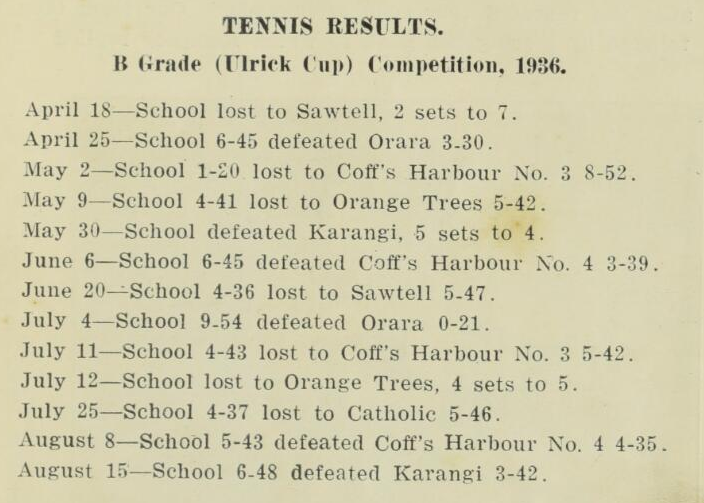 The packing case chair is an example of the resourcefulness of new settlers to the Coffs Harbour area. It has a strong connection to  local families, the Frasers, who arrived in the area in the early 1900s, in part to escape poor health associated with industrial city living. It represents a wave of migration to the local area and gives us a sense of the personal, domestic life of people in Coffs Harbour at a time that required a large amount of ‘making do’ by residents.

It is also an example of Australian ‘bush carpentry’ that was common from the early 1900s until the 1950s. It reflects the lack of resources of most new settlers to non-metropolitan areas, and the need to repurpose cheap, readily available material like packing cases into functional and beautiful household furniture. Though living and working on a farm in Coffs Harbour in the early years of the 20th century would have been harsh and hard work, the chair is also a reminder of the desire to have beautiful, personal items in the domestic spaces of these farms. The packing case chair was used and appreciated by three generations of women in personal spaces such as the bedroom, or for more peaceful pastimes like sewing and reading.

The packing case chair is currently on display in the Coffs Harbour Regional Museum.

With many thanks to Jill Horton for additional information.