The Museum recently digitised a collection of photographs of Woolgoolga Adventure Village in the 1980s. A tourist attraction aimed at children, it contained miniature houses from fairy tales, a working miniature railway, a lake and a large park.

When we shared the images, we received a reply from someone who remembered that every Woopi kid had their birthday party there at some point. Not only that, but her parents now lived on the site where the Woolgoolga Adventure Village once stood. Here at the Museum it definitely pays to ‘know someone who knows someone’!

The residents of the area kindly gave permission for our staff to visit the site and take photos of what the Village looked like now. Here are some standouts! 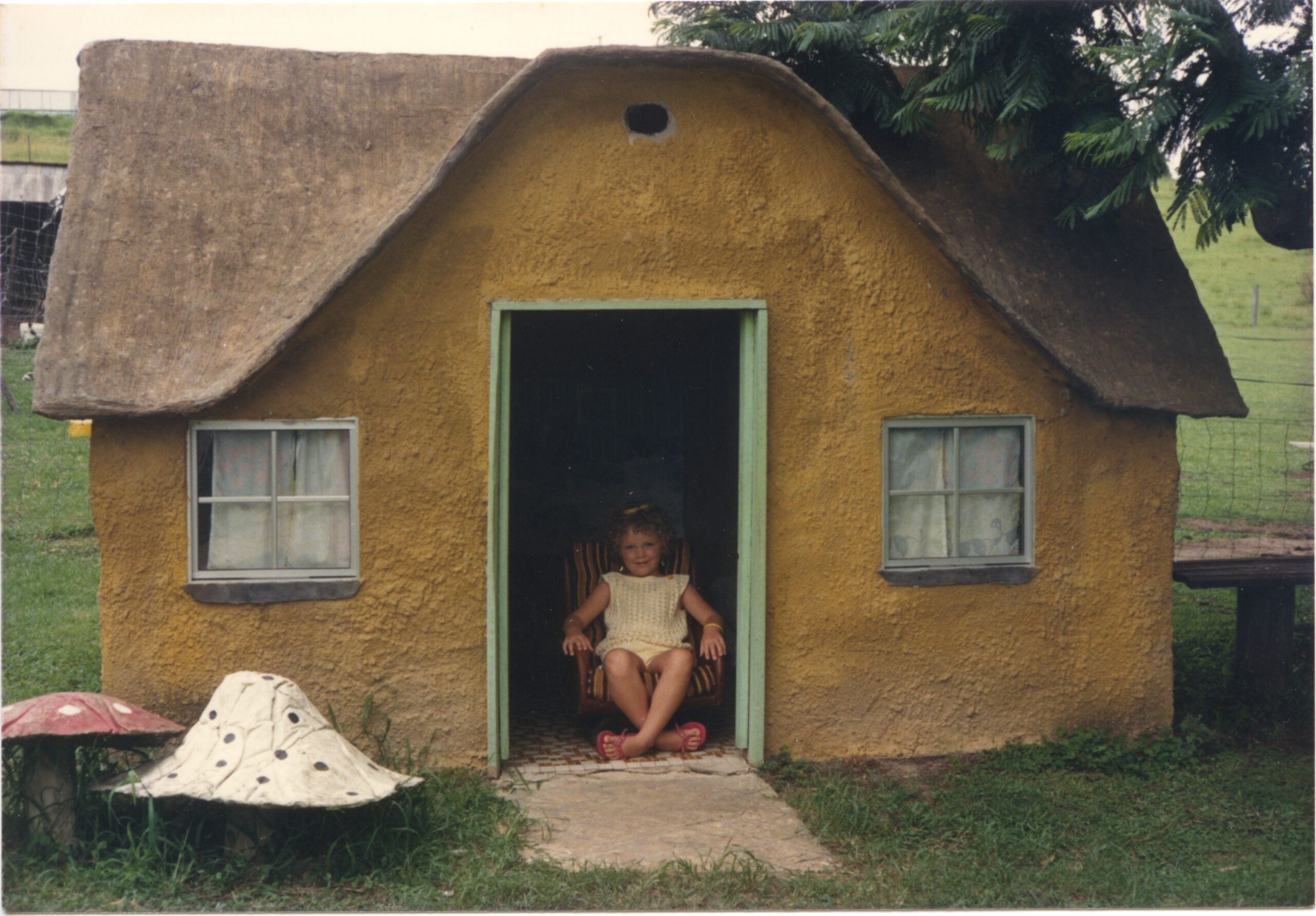 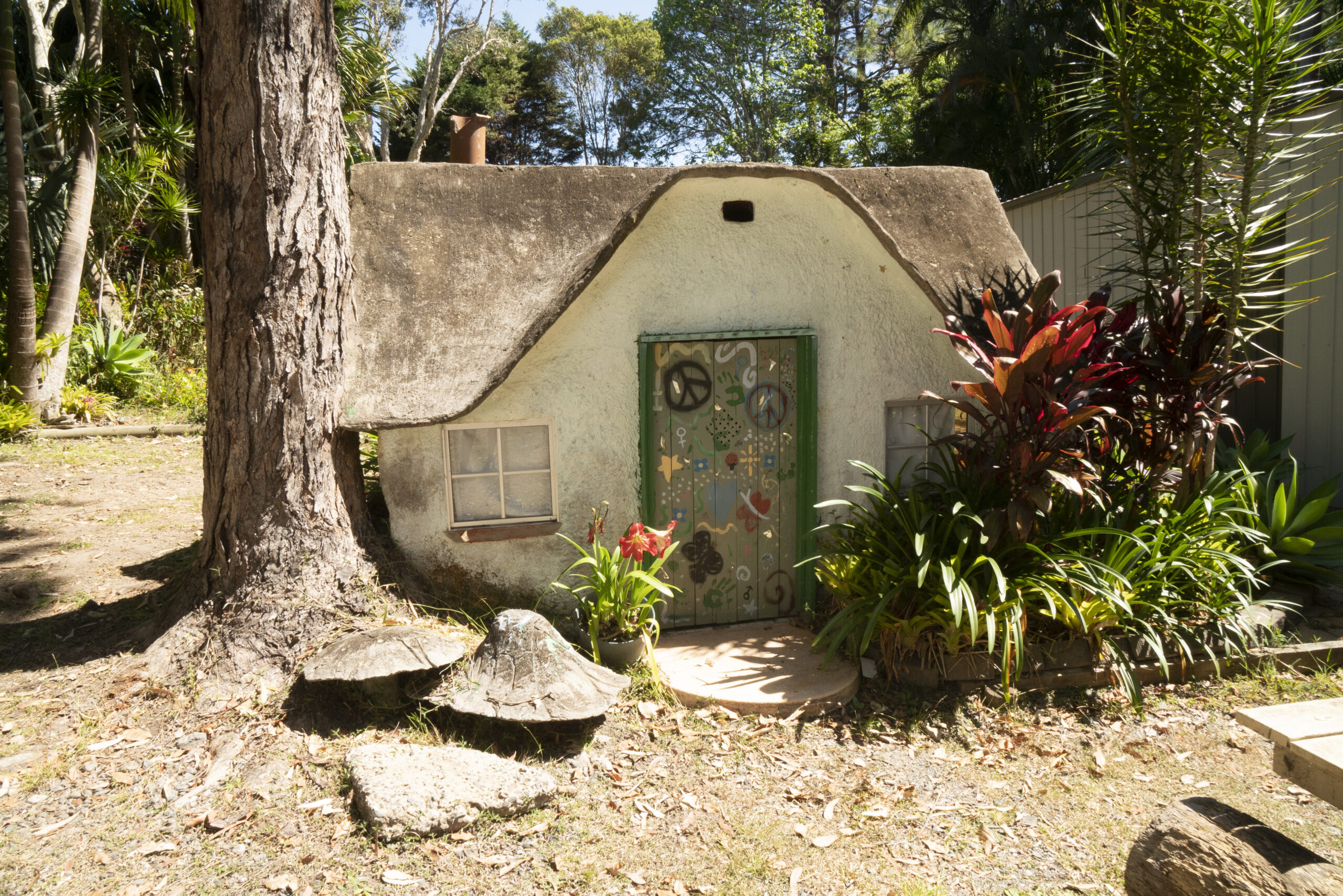 This miniature cottage had a new coat of paint, a brightly decorated front door and a great big tree tucked into its roof! 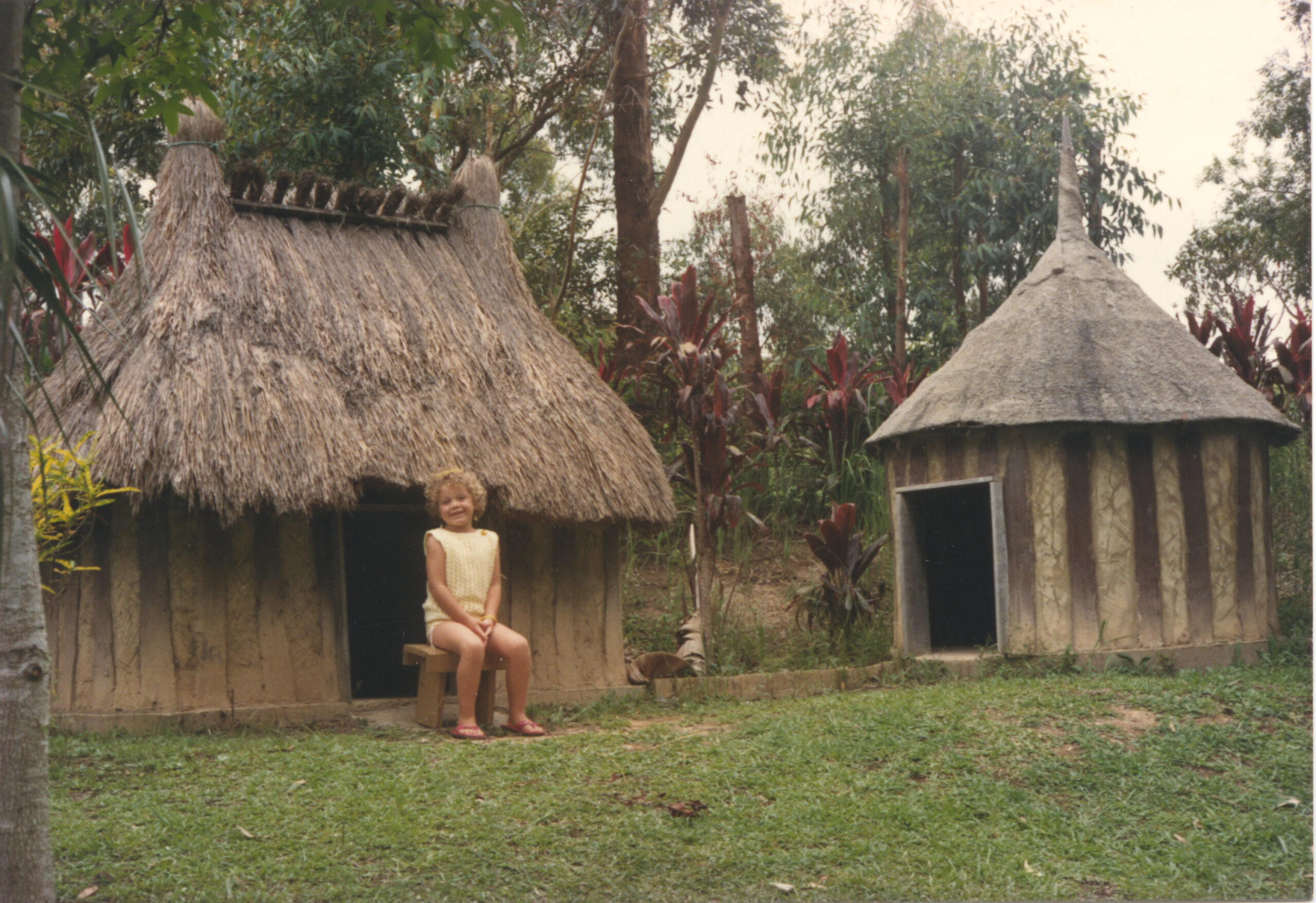 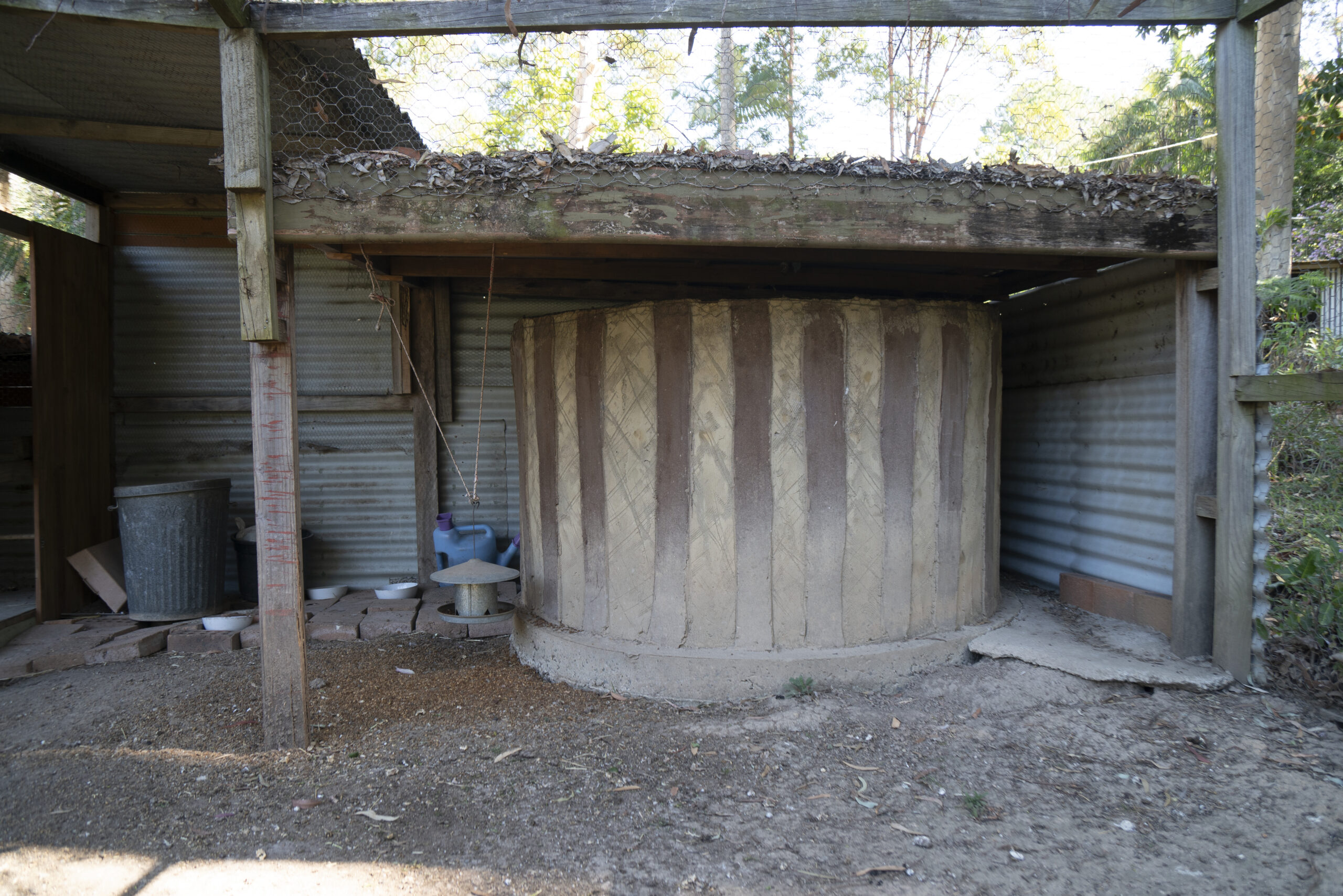 Anything in the Village made of wood was destroyed by termites. Residents were forced to remove the damaged houses, but cleverly repurposed what remained. The remaining section of a Sepik hut has been repurposed into a chicken coop. 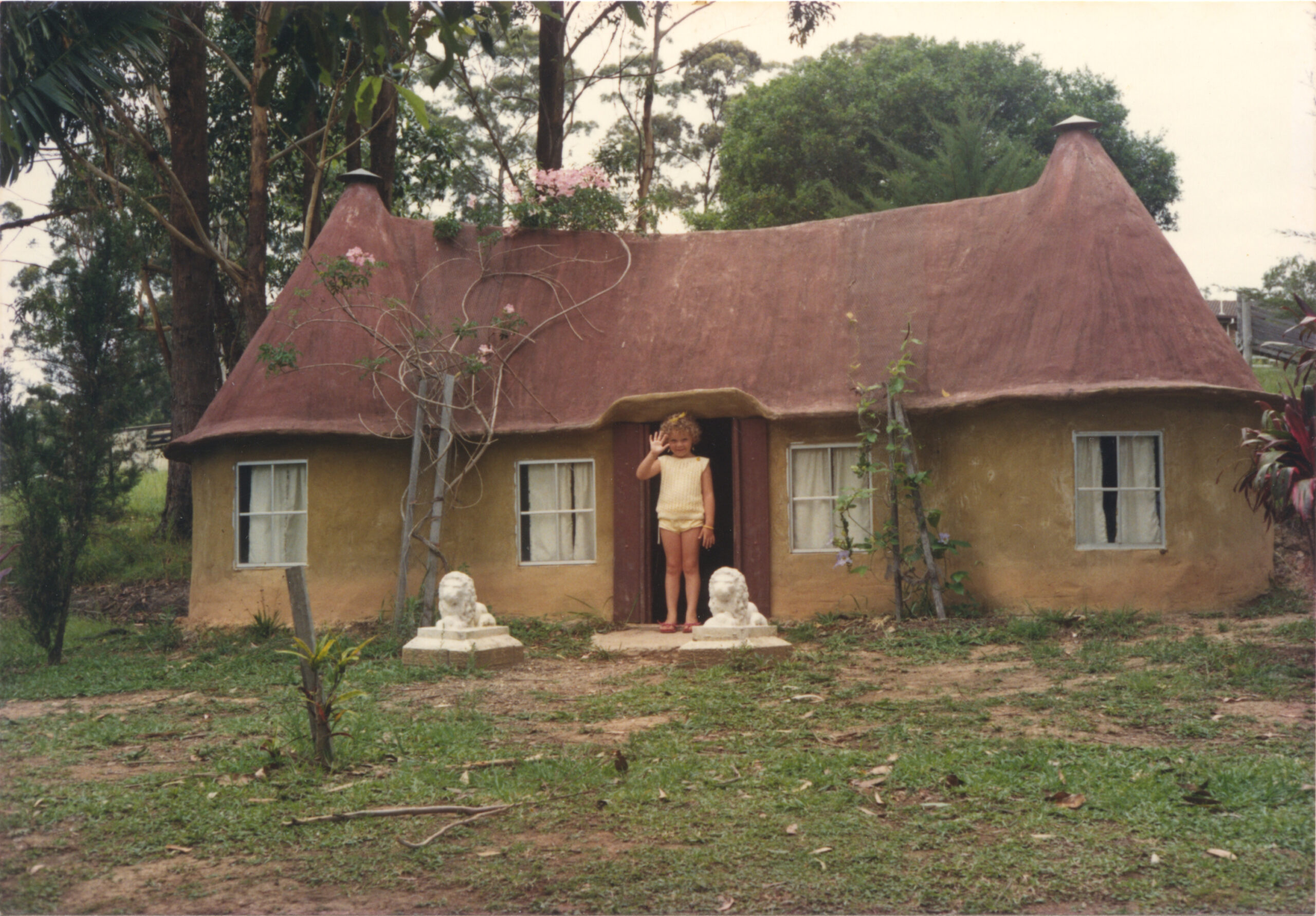 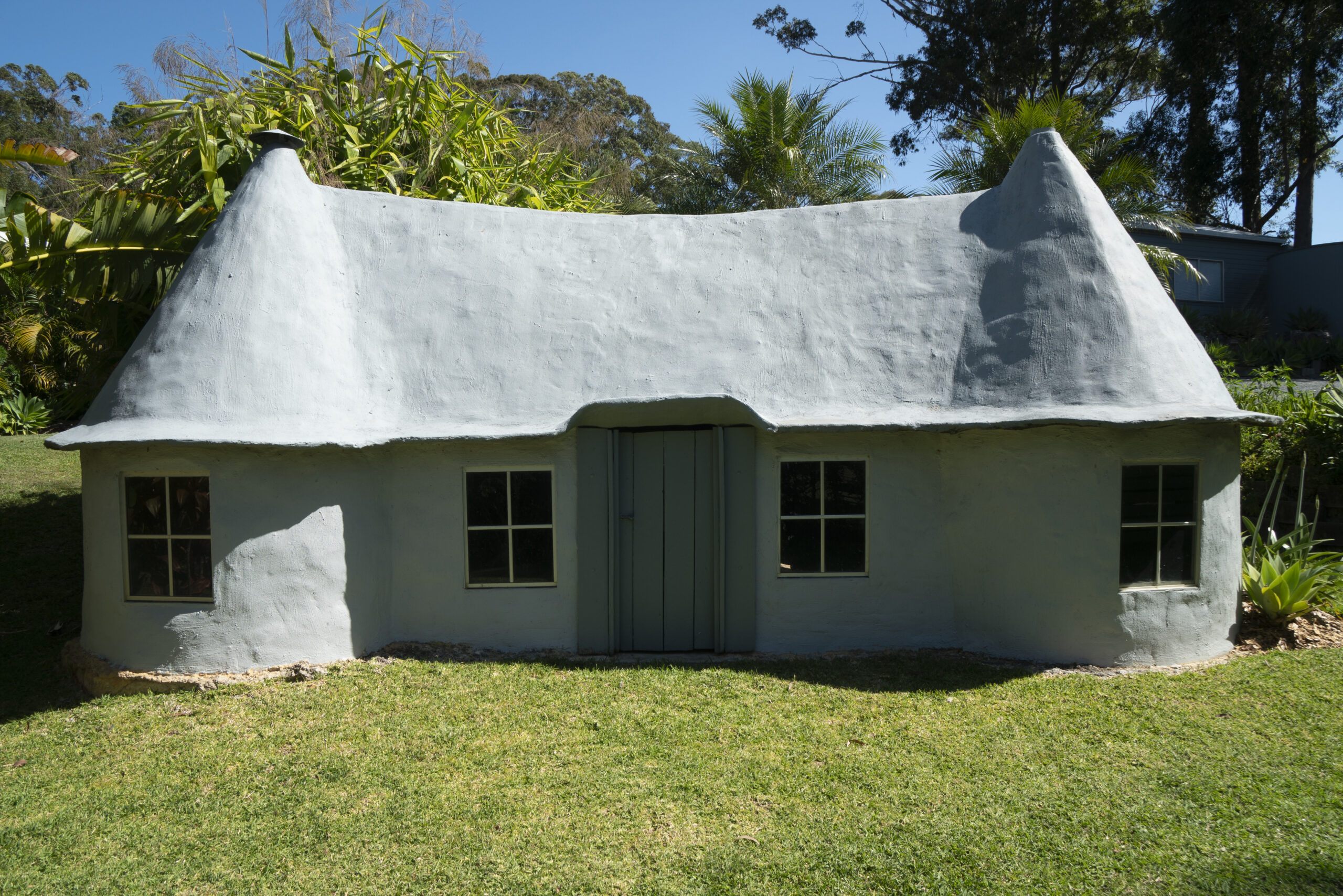 The mini castle has been repainted and is still used by the residents’ grandchildren to play in. 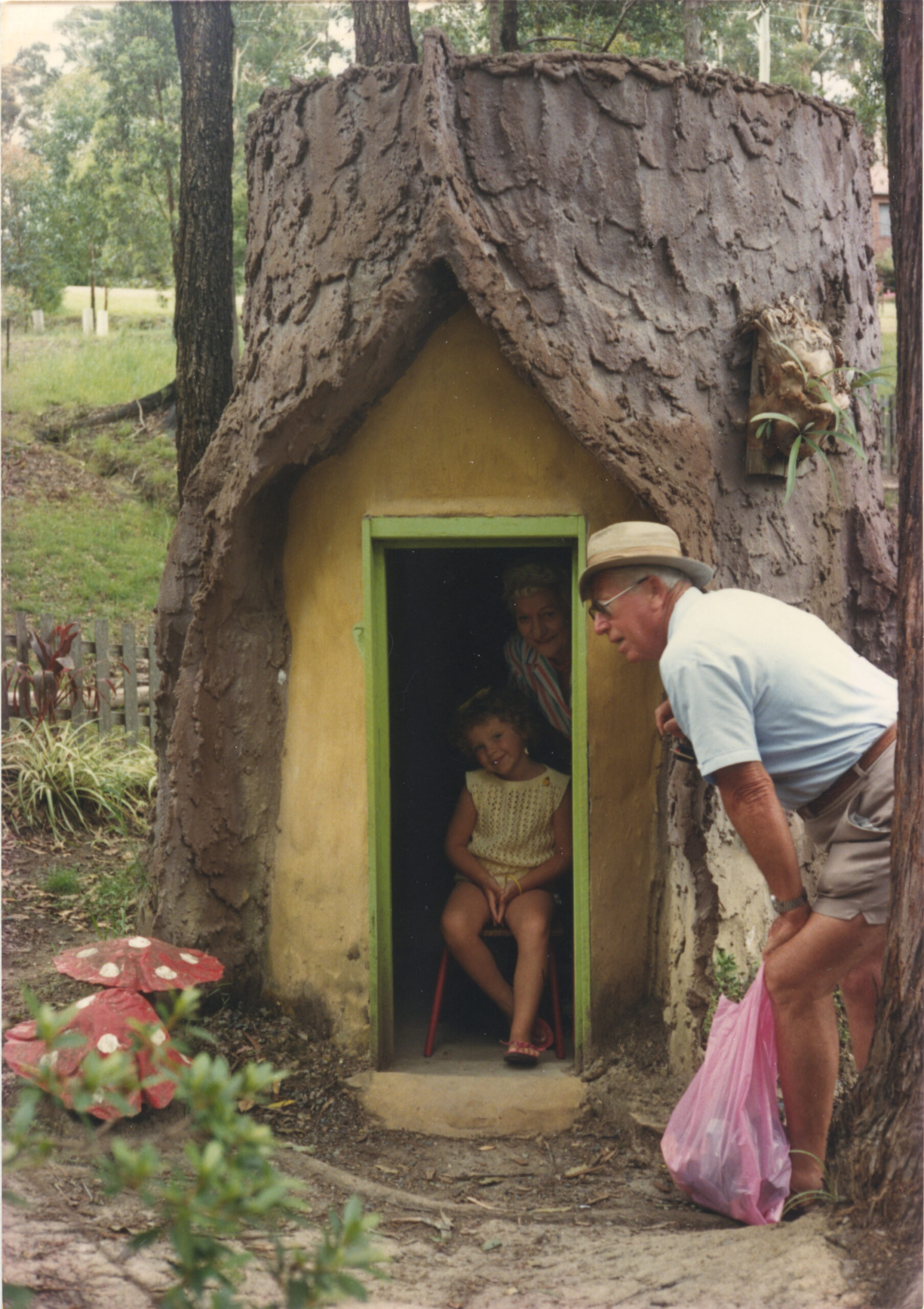 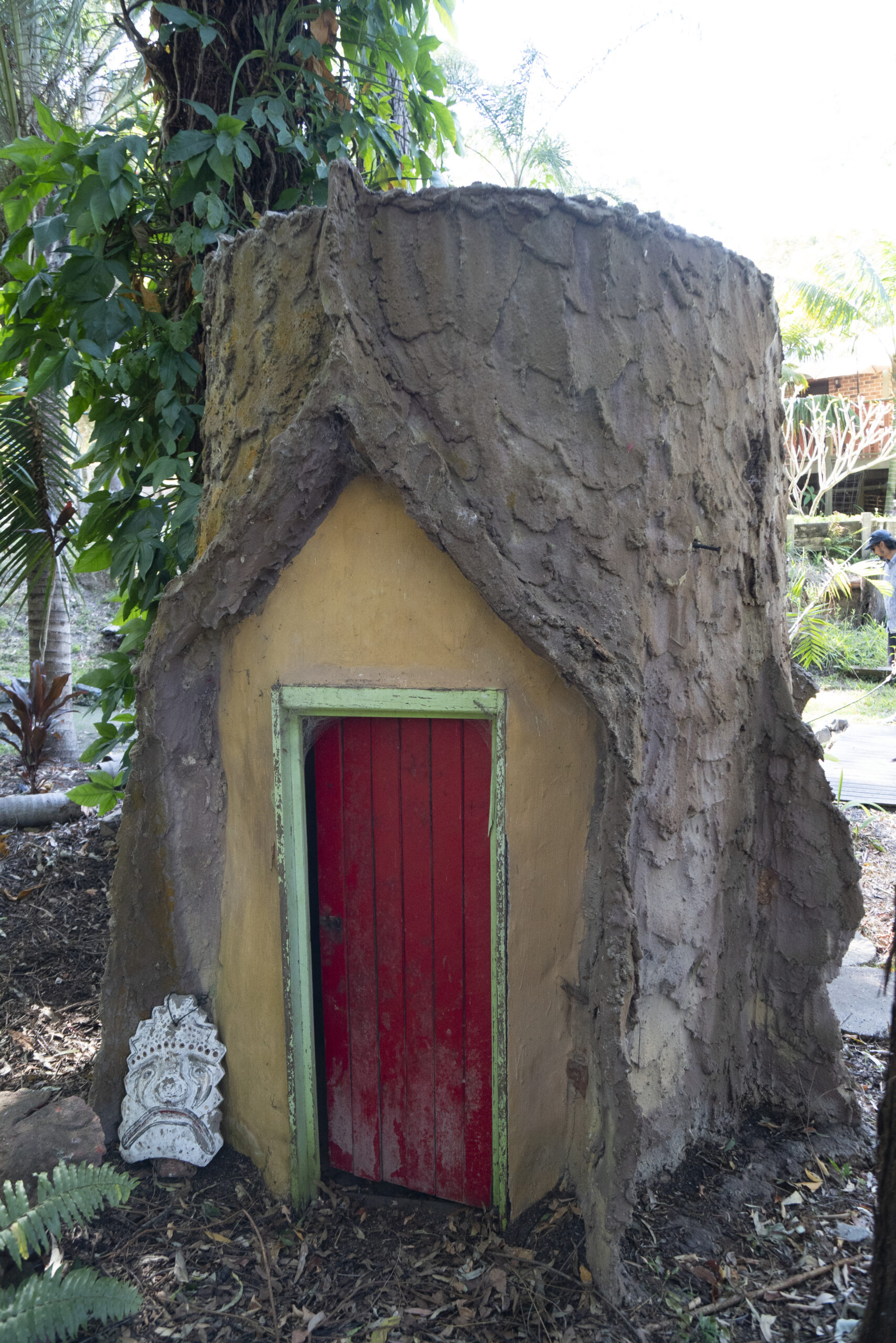 The tree stump house still has its original paintwork, including the bright red front door. Our correspondent said both her and her own children liked to play on this, and almost all of them fell off it at one stage.

It was heartening to see the spirit of preservation shared by the residents living on the site of the former Woolgoolga Adventure Village. Rather than knock the buildings down, they were lovingly refurbished and repurposed.

The site is now privately owned and is not open to the public. We received special permission to visit and photograph the area. You can still enjoy the trip down memory lane by viewing the entire collection of images from then and now for free on Coffs Collections.

I would like to thank the residents who live on the site of the former Woolgoolga Adventure Village for letting me traipse around taking photographs. Thanks also to the original lender of the 1980s images. You have all made our collections and local knowledge richer!

This is a guest post of the memories of Ken Morley, contributed by Marie Davey. 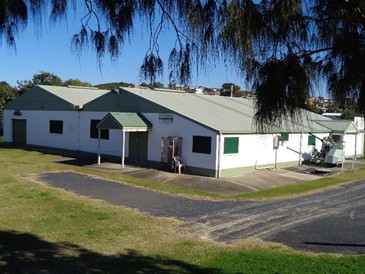 T.S. Vendetta is a Naval training school for young people 14 to 18 years interested in a possible future career in the Navy.  There is no commitment.  The T.S. stands for “Training Ship” and it was started to encourage young people who were interested in Navy affairs.

The Royal Australian Navy decided many years ago, sometime around early 1950s, to further develop what was known as “Sea Scouts” – the equivalent of “Boy Scouts” – into a better organised, navy-backed youth group nurturing an interest in all things nautical and to show young men (and later on young women) that there is an interesting career and a solid future in ultimately joining the RAN.

It was begun pre 1972 and its first leader was Douglas Grange Drysdale who was appointed Lieutenant Commander.

Ex Royal Navy and Royal Australian Navy personnel were co-opted to organise, set up and instruct these Naval Cadets as they became known with the RAN providing training, information, uniforms, equipment etc including a few small sailing boats and a once annually ten day posting to a RAN Base in each state.  (In New South Wales it is to the Navy Base HMAS Watson at Sydney South Head).

These ex-Navy personnel took on the responsibility of training the cadets in Navy routine, seamanship, correct military terminology, sportsmanship and training the cadets to assist their shipmates when necessary.  They also learned how to handle sailing boats, power boats, navigation, signalling and other skills.

The whole idea took off so quickly and became so popular that almost every large town and city in every state had its own unit, particularly places on the coast or adjacent to big rivers.

The ex-Naval personnel running and maintaining these units were given rank and uniform as well as training by the RAN.  The head of the unit is made a Lieutenant Commander and his uniform sleeve has two thick and one thin gold stripe on the lower sleeve.  His 2nd in Charge is a Lieutenant and he has two thick stripes.  The 3rd in Charge is a Sub-Lieutenant who has one thick stripe.  Under these there is a Chief Petty Officer who has brass buttons on the lower sleeve and one or two Petty Officers who have crossed anchors on the upper sleeve.

When a Group go on their Annual Posting to a Navy Base, it is customary for one or two Officers, plus one or two Petty Officers to go with the Cadets for the 10 days or so of the posting.

Each unit is named after the Royal Australian Navy Ship  and that is why Coffs Harbour is T.S. VENDETTA named after a destroyer.  Other units around the State are T.S. TOBRUK, T.S. ANZAC, T.S. ARUNTA, T.S. VAMPIRE and T.S. SYDNEY.

Other items no longer required by the RAN were offered to various cadet units in case they had a use for them.

Lieutenant Ken Morley who spent 5 years with the T.S. Vendetta from 1973 was second in command of the unit.  This is the way things were done during his time in the unit.  Whilst it is still organised and provided for by the RAN, regulations are somewhat firmer now especially with regard to provision of unwanted ex-Navy equipment.  There were no female cadets in his time and the male cadets were challenged to take a few risks, which at this time it is no longer encouraged to do.

Lieutenant Ken Morley personally knew quite a few cadets who then joined the RAN and have gone on to achieve great things saying it was the best thing they have done in their lives.

In the 1970s the Cadet Units were encouraged to obtain boats, which were 27 ft sailing whalers and power-driven 2 cylinder diesel engines, and take them out on the ocean.  Several trips were made to the lighthouse on South Solitary Island.  These were made always under the direction of a Senior Instructor.  All the Instructors were ex-Regular Navy personnel.  It is now considered too dangerous and the cadets are only allowed small canoes used within the harbour and not out at sea.

The Flag Mast at the unit was given to them by the Lighthouse Keepers of the South Solitary Island.  The personnel took the 27ft motor-driven whaler with cadets onboard to pick it up and they towed it back to the unit where it was repaired, painted and installed.  It is still there today.

After his time in Coffs Harbour Lieutenant Ken Morley was transferred by the Bureau of Meteorology to Brisbane Airport and was attached to a cadet unit there for a time.  It was a larger unit and not quite the same relaxed group as was the one in Coffs Harbour.  After this he was transferred to OIC of a new station at Cobar which did not have a cadet unit.  When he returned to Coffs Harbour Doug Drysdale had died and so he didn’t take up the cadets again.