Researching our local history means traversing a loose network of information both analogue and digital. The information is managed by dozens of loosely-connected heritage-collecting agencies. It requires experience to navigate the network between them, but sometimes the connections are right in front of you, just waiting to be discovered.

The first small collection added to Coffs Collections (in 2019) was rescued from old carriers (cassette and CD-ROM). Known as the Voice of Time, it contains oral interviews of local people recorded in the late 1980s. The audio was converted to digital form and can be listened to using any web-enabled device.

Our collected local identity takes many forms. In addition to audio, Coffs Collections  includes (museum) artefacts, (library) pamphlets, (museum) photographs, and donated stories. The latter are mostly on paper and are still to be digitised.

One donated story was a brief biography of a person named Pat Reedy. It summarises his war training and service on Morotai Island (in the Dutch East Indies, now Indonesia), with some photocopies of photographs. They made an immediate connection with some, until now, uncredited photos already in Coffs Collections (just search on Morotai). But who was Pat Reedy? 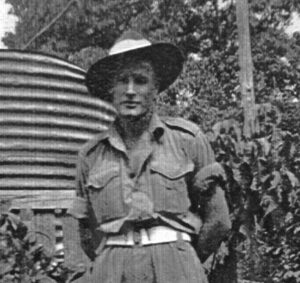 A tantalising clue or two was in the biography with photographs loaned by Helen Landrigan: a image of Pat with his sister Gloria Reedy; a description of his role in the Second World War. But no war record was to be found on the War Memorial’s or the National Archives’ website. No birth listed in the Registry’s index. No inclusion on the Coffs Harbour cenotaph, which meant that Pat had returned home to Australia.

Some broad searching in Trove did find a few articles about Pat in his early days.

and also about the marriage of his sister Gloria in 1942.

The latter was curiously titled Secomb – Faint Wedding, but it also mentioned the late Michael Reedy as father of the bride. A hint to follow further.

This turned out to be Gloria’s second marriage. There was no mention of Pat, but another search under his sister’s married name revealed confirmation of his existence. Was it an unusual form of memorial?

Time to go back to Michael Reedy. He was listed in the NSW Registry’s Death index for 1942. The NSW Marriage index showed his wife’s name, Sarah Jane. She wasn’t listed as a guest at her daughter’s wedding. A check of the Registry’s Deaths index did have a name match for her, but in Orange, also in 1942. This geographical separation was unexpected.

Sometimes only a basic tool such as a certificate can provide the answers. There are several options for obtaining one: buying an original or a transcription, finding it in a family tree in Ancestry (also a cost unless your public library subscribes to it) or, a long shot for contemporary events, finding the information in FamilySearch. Most of these options require spending a little, but they can save time too.

The 1942 death certificate of Sarah Jane Reedy was invaluable – it solved the mystery of Pat’s name. He was formally known as Clifford. Pat was 22 when his mother died; his older sister Isabel was 28 and younger sister Gloria was 10 years old.

Subsequent quick searches uncovered his war service file, which mentioned his lost thumb, on the National Archives’ website; his gravestone in the Coffs Harbour Historic Cemetery via the Ryerson Index; and his funeral notice in the Coffs Coast Advocate (on microfilm at the Coffs Harbour City Library). Alas, they did not explain why Clifford was known as Pat.

But one last search of Coffs Collections revealed the remaining member of the family – Isabel Landrigan, older sister of Pat, who had been a Voice of Time interviewee in 1987. And the instigator of Pat’s brief biography. Our research in Coffs Collections had come full circle.